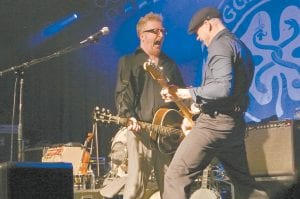 “May the hinges of our friendship never grow rusty” are words from an old Irish toast, but can be fittingly applied to a recent appearance in Asheville, North Carolina by the rock band Flogging Molly.

If any members of the capacity crowd who filled the Orange Peel wondered if Flogging Molly’s special relationship with Asheville had diminished since the band recorded its fifth album there in 2011, this February 28 show quickly laid those doubts to rest.

Before Flogging Molly surprised much of the music world by choosing to record The Speed of Darkness in an Asheville studio that was once a church, the L.A.-based Celtic punk band had already enjoyed much success. Several of their previous albums, including Within a Mile Home and Float, broke into the top 20 on the Billboard music charts and even peaked at number one on the indie charts. When they arrived in Asheville for the recording sessions last year, they made several friends and adopted the town as their home away from home.

The sold-out Orange Peel show was the ninth on the band’s Eighth Annual Green 17 Tour and was packed with many of their acquaintances and fans who share the group’s fun loving lifestyle. Even before the opening bands took the stage, a party had erupted and was in full swing by the time the headliners entered. When the band, which is led by Dublin, Ireland-native Dave King, finally took to the stage and played the song “Drunken Lullabies” the crowd danced, sang and clapped, some of them relating the song to their condition at the time. Similar songs included in the jam-packed two hour set were “Saints and Sinners,” “The Son Never Shines” and “Power’s Out.”

Halfway through the set the group played one of their most popular songs “Black Friday Rule”, a fast tempo ballad that tells the story of how King made it to America. During this song, five members of the band left the stage, leaving guitarist Dennis Casey and drummer George Schwindt to entertain the audience. Casey’s masterful guitar solo was soon accompanied by Schwindt’s artful drumming before Schwindt performed a solo himself. After that the rest of the band rejoined the duo to finish “Black Friday Rule,” Flogging Molly continued with songs such as “Oliver Boy,” “Float” and “Devil’s Dance Floor.” Throughout the set, violinist Bridget Regan, the wife of King, played a tin whistle to add another dimension to the band of multi-instrumentalists.

Before leaving the stage, King thanked the Ashville crowed for welcoming the band when they were recording The Speed of Darkness and again for the Orange Peel show.

“This city was great to record in because if we broke a fiddle, there would be another fiddle at our doorstep within an hour,” he told the crowd. “And we have met so many people here that we will never forget and it’s nice to see them again!”

With this simple statement,

King proved that even after a year has passed, the hinges that he had formed with Ashville had not rusted and will swing freely as long as the band exists. After King spoke the group left the stage, only to come back for a much-deserved encore that included a cover of Bob Dylan’s “The Times They Are A-Changin’” and the traditional Irish folk song, “Salty Dog.”

• “If I Ever Leave This World Alive”