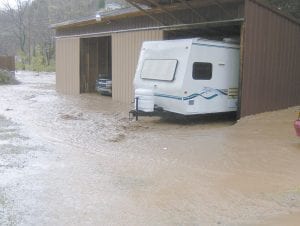 These photos were taken on the evening of April 3 at the home of Ronnie and Freida Ratliff on Buttrey Drive at Little Colley. “I feel we were blessed, some here on Colley had it so much worse,” said Mrs. Ratliff.

While all roads closed by flooding last week are now open, there is still “a lot of work to do” before things get back to normal in the communities of Little Colley, Camp Branch, Colson, Sandlick and Smoot Creek, Letcher County Judge/Executive Jim Ward said this week.

“ There really was no warning of it,” Ward said of the April 3 flash flooding. “It was in isolated areas.”

Ward said a portion of a state highway at Smoot Creek behind Action Auto has flooded before, but he said he had never seen that much water there.

“That is the most water I have seen there,” said Ward.

Ward said about three inches of rain fell in about 45 minutes to an hour.

“It was so much water it washed culverts out,” said Ward. “( Culverts) were down the creek.” 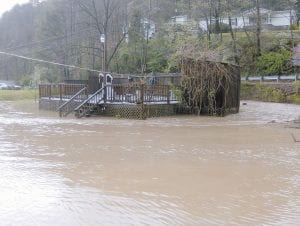 Sugar Run in Camp Branch, Cinnamon Drive in Smoot Creek and Sexton’s Branch in Little Colley were impassable for nearly three days. Ward said crews had the roads back open by Friday night.

“We still have a lot of work to do,” he said. “We are going to go back and clean ditches and small culverts.”

Ward said some roads still need new gravel. A number of house received damage to their basements, he added.