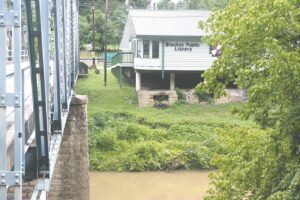 A LINE OF SHADOWS ACROSS THE TOP of higher vegetation marks the end of solid ground on the banks of the North Fork of the Kentucky River near the Blackey Library. (Photo by Sam Adams)

Flooding during late winter and spring has caused the riverbank under the Blackey Public Library to erode dangerously close to the building’s foundation.

The Letcher County Library Board is now in the process of hiring an architect to oversee the rebuilding of the bank before the building is undermined.

The Blackey Library was built in 1986 next to the bridge that crosses the North Fork of the Kentucky River into town, and was originally on level ground next to KY 588. But an addition to the back of the library is supported by columns sunk into the ground above the stone foundation of an earlier building.

The building has stood for years without any problem, however logs and other debris washed into the river during flooding changed that this year. The debris piled up against the middle bridge pier, creating a natural weir in the center of the river.

“All that debris forced most of the water around it and into the bank,” Library Executive Director Alita Vogel told the board at its meeting on Monday.

The riverbank is mostly sand, and is now within eight feet of the older foundation, Vogel said. The forecast calls for the possibility of more flooding this week, with rain and thunderstorms to continue through Sunday.

The board has already voted to contract Whitesburg architect Bill Richardson, who designed the library and the addition, to oversee the process of rebuilding the riverbank.

Board Member Linda Collins asked if it was possible to move the library to a different building, but Vogel and newly appointed Board Member Howard Stanfill said people in the area like the library where it is.

Board Member Lina Tidal, who retired as executive director of the library district, said Neon Public Library also is subject to flooding, and the buildings have flood insurance to cover damages.

Tidal questioned why the board needs to hire an architect for the project. Vogel said it is required by the Kentucky Department of Libraries and Archives.

Also at the board meeting on Monday, the library board voted to keep its tax rate the same as last year. Vogel said the move will cost the library system $72,000 this year, but that the district has $2 million in certificates of deposit and can keep the rate the same this year without affecting operations.

She also outlined repairs that need to be done to the Harry M. Caudill Memorial Library in Whitesburg. She said she wants to remove the carpeting on the main floor of the building and replace it with rubber flooring used in many other libraries. She said the elevator in the building, which was built as a Hobbs 5, 10 and 25 Cent Store in the early 1970s, also needs to be replaced.

“It’s probably 50 years old, and the internal workings should be replaced,” Vogel said.