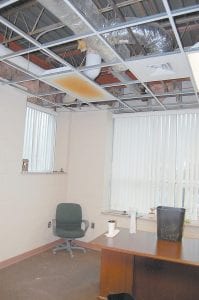 The drainpipe that clogged up with frozen water over the weekend is seen in this picture of Law Clerk Larry Adams’s office in the wing of the Letcher County Courthouse that contains Circuit Judge Sam Wright’s offices.

Letcher County Judge/ Executive Jim Ward estimated that costs associated with water damage to the Letcher County Courthouse could total as high as $70,000.

Twenty dehumidifiers and six industrial fans were used Monday and Tuesday to dry out parts of the courthouse that flooded over the weekend after freezing water clogged up a roof drain and flooded parts of all three stories.

Once the moisture is removed, the courthouse will be sprayed for mold and mildew and well as sanitized, Ward said.

“It’s like it was raining in here” said Ward.

The flooding occurred over the weekend when no one was present on the first and second floors. Flooding was discovered around midnight on Sunday when the water reached the jail. 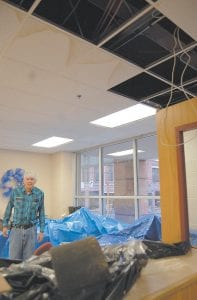 Letcher County Clerk Winston Meade was overwhelmed Monday morning as he stood in part of the clerk’s office that was damaged by flooding over the weekend.

“ Had it not been for Don McCall, the inmates and staff, everything would have been destroyed,” said Meade.

“ The water in this offi ce was over my feet,” said Meade referring to his offi ces that are located where the Letcher County Sheriff ’s Department used to be stationed. “It was teamwork. It was unbelievable.”

Damage caused by the water would have been much worse if jail inmates hadn’t chipped in to help county workers push out water, said Ward.

A cleanup team sent by Kentucky Association of Counties (KACo), the county’s insurer, has been on site since Monday afternoon.

Water-soaked receipts and other documents, compiled by Ward’s office, were being kept in a secure room on the second floor while undergoing an audit. Those records and 15 deed books were sent off to be dried out by specialists, said Ward.

“ The deed room was my biggest concern,” said Meade, who is relieved that the offices didn’t lose any permanent records, thanks to backup systems.

The roof drainpipe is located directly above Law Clerk Larry Adams’s office in the wing of the courthouse which houses the offices of Letcher Circuit Judge Sam Wright.

Water made its way to the reception area in the circuit judge’s wing, but not to the judge’s chambers. Water got underneath the door to a small part of the circuit courtroom.

Four trials set for Monday and hearings set for Tuesday will be rescheduled. About 60 people were scheduled for motion day on Wednesday.

“The longer we go the more it mounds,” said Wright. “We have to keep moving with the volume of cases we have.”

Ward said Tuesday afternoon that possibly portions of the courthouse would be open today (Wednesday) if all went well Tuesday evening.

In addition to some areas receiving new flooring, many ceiling tiles were destroyed and require replacing.

Computers that got wet haven’t been looked at yet, Ward said.

County workers used a slate bar to jab ice out of the roof drainpipe early Monday morning. Then a water hose was stuck down the drainpipe to help melt the ice.