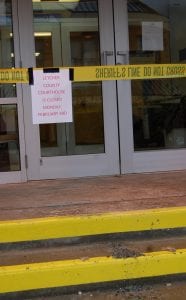 The Letcher County Courthouse is closed Monday after frozen water in a roof drain pipe caused flooding in parts of the building.

The Letcher County Courthouse is expected to remain closed at least through Tuesday after freezing water clogged up a roof drain and flooded parts of all three stories.

The flooding occurred over the weekend when no one was present on the first and second floors. Flooding was discovered late Sunday night when the water reached the jail.

Letcher County Judge/Executive Jim Ward said damage caused by the water would have been much worse if jail inmates hadn’t chipped in to help county workers push out water.

A cleanup team is being sent by the county’s insurer.

Four trials set for Monday will be rescheduled.

Four trials set for Monday will be rescheduled.