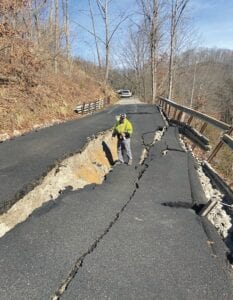 Four inches of rain over the weekend sent streams out of their banks, causing damage to roads and bridges, and knocking out power to some homes.

According to Kentucky Mesonet Weather at Western Kentucky University, Letcher County received 4.04 inches of rain between 1:05 p.m. on Friday and 7:50 a.m. Monday, with 1.9 inches of that falling between 9:30 p.m. Sunday and 1 a.m. Monday.

Power remained out Tuesday in spotty locations around the county, including parts of McRoberts and Fleming-Neon, Carcassonne, Jeremiah and Linefork, Whitesburg and Whitco. All of the outages are in the Kentucky Power Company service area. Cumberland Valley Electric, which serves about 1,100 customers in Letcher County’s Cumberland River area, reported no outages as of Tuesday.

Roads were reported underwater Sunday night at Big Cowan, the Frog Pond on KY 7 near Blackey, KY 7 South below Blair Branch, KY 1811 at Smoot Creek, Highway 3401 behind Parkway Motel near the Mountain Vendors Mall, Sergent, near Foodworld IGA in Neon Ky. 805 between Jenkins and Neon, the “Coke Plant Curve” in Whitesburg and near the Health Department in Whitesburg. 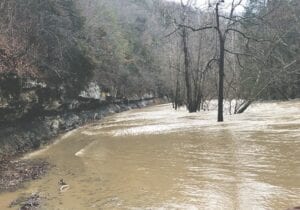 WHERE’S THE ROAD?The North Fork of the Kentucky River had swallowed KY Highway 588 near Ice, near the turnoff to the Boney Banks Cemetery, when this photo was taken Monday morning. (Photo by Mike Caudill)

Rural roads appear to have taken the worst damage.

“Culverts stopped up, we have at least five or six slides where the roads broke off. It usually hits one part of the county, but this seems like it hit all over,” County Judge/ Executive Terry Adams said.

A landslide pushed a mobile home off its foundation at Gordon, a 90-foot wide slide took out part of Klenco Road at Ulvah, and another slide cause a large break in Motion Road on Smoot Creek Mountain. In addition to county roads, Adams said many privately owned culverts were washed away in the flooding.

“The county is not able to work on those, but they’ve definitely got damage,” he said.

The county is keeping a list of private damage as well in case a federal disaster is declared.

The flooding was widespread across the state.

By Tuesday, the Breathitt County Emergency Management Department had ordered the evacuation of a trailer court, the hospital, a nursing home and other homes and businesses around Panbowl Lake because of erosion under KY 15, which separates Panbowl and the Kentucky River.

H.B. Elkins, spokesman for District 10 of the state Highway Department, said social media had blown the danger out of proportion, but that the river is eroding the highway.

As of 3:30 p.m. Tuesday, the road was still open, and Elkins said as the river recedes, so will the danger.

“At this time, Kentucky 15 in Jackson is open.The energy and environmental cabinet has experts on the scene … and transportation’s geotech folks are on their way. At this time, the road is still open,” Elkins said.

Panbowl is a manmade lake fed by small streams and surface water. It fills the old riverbed, which was moved when KY 15 was built in the early 1960s.The highway dams up both ends of the old riverbed. Residents are worried that if the highway fails on one side, the river will wash back into its old bed, flooding Panbowl and everything around it.

The city of Beattyville was still largely underwater on Tuesday, and the mayor there had declared a curfew to keep people out of the flooded streets Monday night.

Elkins, who lives in Lee County, said the flooding in Beattyville, the county seat, was the worst he had ever seen it, including in 1984.

“Some people have said it rivals 1957, and Buckhorn Dam wasn’t built in 1957. If this had happened before that, there’s no telling what it would be,” he said.

The Kentucky Highway Department District 12 in Pikeville reported some roads still underwater Monday afternoon in Letcher County, including KY 7 at Blair Branch, KY 931 South at Cowan, Junction of KY 7 and KY 1410 at Colson, and KY 931 North at Sandlick. But District 12 Public Information Sara George said the damage that had been surveyed so far on Monday evening was not serious.

“It’s just normal stuff right now. We have a lot of drains clogged and some slides, but nothing that can’t be cleaned up,” George said.

Some roads were still underwater at the time, so workers had not been able to check everything.

Fleming-Neon has historically had a major problem with flooding, but Mayor Susie Polis said the city sustained little damage this weekend.

“We had some, but not bad,” she said. “We’ve got a bridge out that I’m trying to work on getting fixed, or get someone to tell me what to do with it, but there’s not much else.”

The bridge is at Welch Hollow on KY 805.

In Jenkins, Mayor Todd Depriest said workers were out most of the night on Sunday clearing debris from culverts and bridges, but there did not appear to be any major damage. County Judge/Executive Terry Adams declared a state of emergency Monday morning, and Depriest said the county had asked him if wanted to declare an emergency in the city as well.

“For the couple of things we got, I didn’t think it was worth the paperwork,” Depriest said.

Whitesburg also dodged any serious damage, though a couple of roads were blocked by the Kentucky River.