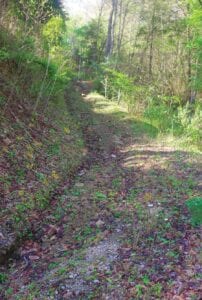 Cemetery roads like this one at Doty Creek can be all but impassable to visitors unless the county road department repairs them first. (Photo by Sam Adams)

Raleigh Cemetery Road isn’t visible from the main road up the hollow.

A bridge shared with a single-wide mobile home turns off the asphalt, and a gravel road circles past a barn and back to the bridge. The cemetery road starts in a small, grassy bottom to the right of the gravel, then turns abruptly up a mountain. It’s a rocky, rutted path, washed by heavy rain and choked with grass, brush and briars. It twists around the hillside like a snake, blocked here and there by deep gullies and fallen rocks.

It’s a road more fit for a goat than a hearse, and people in the neighborhood say a four-wheeler is the only motorized vehicle than can get beyond the first few hundred feet.

Like county and state roads across eastern Kentucky, some cemetery roads have fallen victim to flooding over the past month, prompting calls to county officials from constituents who want to be able to bury loved ones without carrying a casket to a mountaintop graveyard.

“There was so much rain it cut gullies in them,” Letcher County Judge/Executive Terry Adams said. “They’re not used very much, so as long as the water doesn’t get backed up and cross them, they’re usually in pretty good shape.”

Five out of the six public cemetery roads checked by The Mountain Eagle were either paved or well graveled and easily passable in a two-wheel-drive car. Raleigh Cemetery, at Doty Creek, was an exception.

It is one of a long list of cemetery roads that the county has either recently added or is in the process of adding to the county road system. Those that aren’t, Adams says, are illegal for the county to use state Road Aid money to fix.

Raleigh Cemetery is not in the county road system yet, and it is one of many public cemeteries in the county whose roads have not been regularly maintained by the county. It’s an issue that has taken center stage at fiscal court meetings this year, with magistrates voting last week to pave the roads in emergencies, using money from the county’s general fund.

Adams said the roads must have a “CR-number” before it is legal for the county to work on cemetery roads using state Road Aid money. The fiscal court has added dozens of roads to the county road inventory over the past few months, and District 2 Magistrate Sherry Sexton said adopting them is also a problem.

Instead, the court agreed last week that when the road department works on a cemetery road without a CR number, it will keep separate timecards, lists of fuel costs, tons of gravel and any other expenses, and wages and other costs will be paid from the general fund.

“Before we can put any money into them from the road department money, they have to be a county road and the court voted that in emergency situations, as long as it was a public cemetery, we would work those out of the general fund,” Adams said. “That doesn’t have the same restrictions as the road fund.”

Eventually, Adams said, the county will have to adopt the roads into the county system, but that still won’t help all the people because of disputes over ownership of the road, or because of forms filled out by people seeking to have their cemetery roads maintained falsely claimed the cemetery was public when it actually had restrictions on who could be buried there. If there is any kind of dispute over the county taking over maintenance of a road, he said the county will pass until the parties disputing it work things out.

“It costs us money out of the general fund, so if it’s a hostile situation, we’re not going to do it,” Adams said.