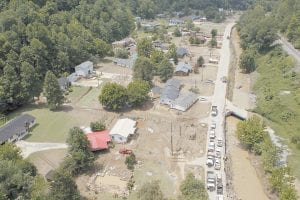 A few thousand homes remained without running water Tuesday in the wake of harsh flooding in Pike County that turned over cars and destroyed homes.

Local, state and federal officials were in the county to begin estimating damage so they can seek federal assistance.

“The aftermath of the flooding in Pike County is really unlike anything I’ve seen before,” Gov. Steve Beshear said in a news release.

About 3,000 customers of the Mountain Water District still had water outages Tuesday, while 25,000 customers remained under a boil water advisory.

Officials hope to cut the number without water service in half by the end of Tuesday, said Grondall Potter, project manager for the company that operates the water district.

But Potter said some areas are so isolated after flooding washed away roads and tossed debris that it could be three weeks before some customers get their water turned on. 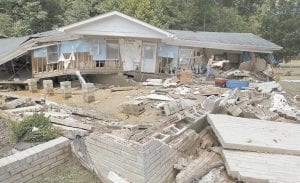 Many homes were knocked off their foundations in Raccoon in Pike County. (AP Photo/The Herald-Leader, Charles Bertram)

Potter said the flooding damaged the main water plant’s intake valve, but it has since been repaired.

“It was the swiftness of this (flood) that caused so much of the damage,” Potter said.

The Saturday night storms in central Pike County knocked out power to more than 6,000 homes, but only about 180 were still without power as of Monday night.

Beshear visited the devastated areas on Monday and has declared a state of emergency for the county. Two deaths have been attributed to the flooding.

“We are resilient people here in the mountains, we take these disasters and we go ahead and build back and move on,” said Rutherford, who likened the damage to a tornado.

Cases of bottled water were being handed out, and about 14,000 residents have been told to boil their tap water before using it. 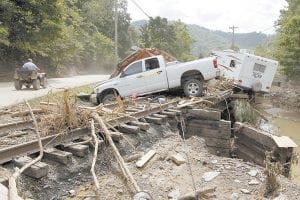 Trucks and campers were left on the railroad track earlier this week after weekend flooding in Raccoon in Pike County. (AP Photo/The Herald-Leader, Charles Bertram)

The National Weather Service said between three and seven inches of rain fell in the area Saturday evening. Areas just east of Pikeville were the hardest hit by storms, according to the weather service.

“It absolutely destroyed everything in its path,” Rutherford said.

A man died after falling off a bridge in Pike County near Zebulon on Saturday. State police said Craig Morris, of Carrie, stopped on the bridge to look at a family member’s home during the storms. The second victim, Donna Walters, of Pikeville, was swept away by floodwaters, Rutherford said. Her body was found Sunday.

Once damage assessments are finished, the state will ask for a federal disaster declaration, making the county eligible for federal funds, Rutherford said.

“We’re going to have a lot of destroyed homes in the county,” said Robyn Tackett, director of the Big Sandy Red Cross chapter.

Tackett said an overnight shelter set up at Pike Central High School saw about 100 people during the day, but only about two dozen slept there Sunday night.

She said despite the devastation, many opted to stay in the their flood-damaged homes at night to protect from looting.

“That doesn’t mean the structure’s sound enough to stay in, but they just want to hold on to what little bit they have left,” Tackett said.