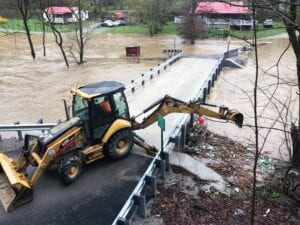 For the second time in a month, Letcher County residents awoke Sunday morning to find that heavy rainfall had caused the streams, creeks and rivers in their communities to spill over their banks. In the photo at left, a backhoe operator worked feverishly early Sunday afternoon to clear debris from a bridge over the North Fork of the Kentucky River at Holbrooktown, between Mayking and Sergent. Below, the river’s depth had fallen dramatically by Tuesday afternoon but was still higher than normal. 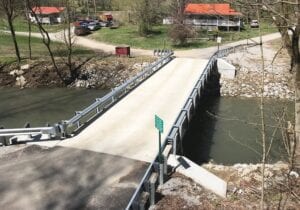 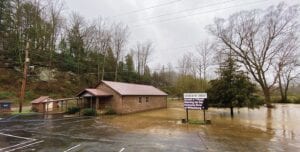 An electronic sign outside Church of Christ near the mouth of Cram Creek, Mayking, cautioned residents that the National Weather Service in Jackson had issued flood warnings for Whitesburg and Letcher County. The warning proved to be correct, as can be seen by the brown water that spilled over the banks of the North Fork of the Kentucky River and flooded the church’s well-kept grounds and parking lot. (All photos this page by Chris Anderson and Ben Gish) 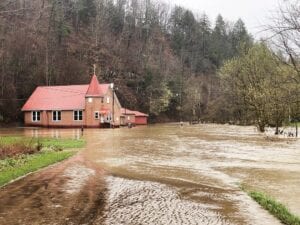 The Old Regular Baptist Church at Mayking was still surrounded by floodwaters from the North Fork of the Kentucky River when this photo was taken early Sunday afternoon. 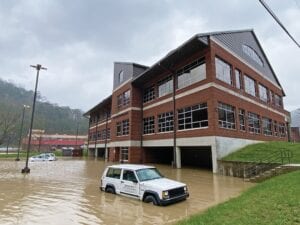 Floodwaters from the Kentucky River’s North Fork took over the parking areas associated with the Letcher County Health Department in downtown Whitesburg. The waters also covered a portion of nearby Jenkins Road, leaving it largely impassable. 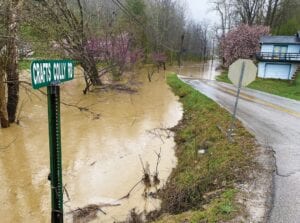 Above, residents of Crafts Colly Creek near Ermine were stranded either in or out of the long hollow by waters that had backed up from the point where the creek empties into the North Fork of the Kentucky River. At right, a flood gauge in downtown Whitesburg showed that water in the North Fork had risen to 10-1/2 feet by early Sunday afternoon, well above the normal level there of about a foot or so.