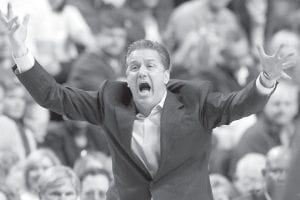 Kentucky head coach John Calipari reacted to a call during the second half of the Wildcats’ 61- 57 upset over Florida at Rupp Arena in Lexington Saturday. (AP Photo/James Crisp)

Almost every team in the Southeastern Conference has at least some hope of taking home the tournament championship after a wild season in this league.

Florida. Tennessee. Kentucky. Mississippi. Alabama. Shoot, maybe even Vanderbilt playing a couple miles away from home has a shot.

“There’s a lot of teams out there that are very, very capable,” Florida coach Billy Donovan said. “And when you’re dealing with a onegame situation and a one-game tournament, I think anything can happen. I would agree. I think the tournament’s wide open.”

Some see the SEC as being down this season, but coaches around the conference see a league where almost any team can win on any night.

Well, maybe not across the board.

Vanderbilt avoided joining those teams by winning four of their last five games to earn the No. 10 seed. Commodores coach Kevin Stallings, who won this title a year ago in New Orleans with six players no longer on his roster, said logic suggests it’s easier to win four games in four days than five in five.

“The tournament is a little bit more wide open this year than it’s been in other years,” Stallings said. “I’m certainly not going to sit here and say we can or cannot or Arkansas can or cannot. I’m no prognosticator other than to think our tournament will be very interesting, and I think a lot of teams are good enough to win it. And so we’ll just see what happens.”

No. 13 Florida (24-6) is the SEC’s only ranked team and the only team whose NCAA tournament berth seems secure as the regular season champ. The Gators have not won this tournament since wrapping up a three-year run in 2007, and they have lost four of five away from Gainesville.

Defending national champion Kentucky (21-10), Mississippi (23-8) and Alabama (20-11) also earned byes. Wildcats coach John Calipari may be praising his fellow SEC coaches for their hard work this season, but all three teams likely need at least one win — or more — to clinch an NCAA tournament berth with only the tournament title and its automatic berth a sure thing Sunday.

“At the end of the day, you have to play basketball, and the second thing is you’ve got to battle and fight,” Calipari said. “If they come at you, you can’t quit.”

No SEC team is hotter than Tennessee (19-11) with the Vols winning eight of their last nine going into Thursday’s game with either South Carolina or Mississippi State. But the Vols took the same streak into the SEC tournament a year ago only to get bounced by Ole Miss in overtime, a loss Jarnell Stokes said they remember that well.

“It definitely motivates us, just knowing what happened,” Stokes said. “Watching Selection Sunday last year as a team, not making it, then waking up the next morning and finding out you’re in the NIT, that’s probably one of the worst feelings as a player. That’s still in the back of our minds.”

Only Kentucky (27) and Alabama (6) have won more SEC tournament titles than Tennessee (4), but the Vols haven’t won this championship since 1979 in the first year that it resumed. Coach Cuonzo Martin is telling his Vols to take care of their own business.

“Let’s not leave this in anybody’s hands,” Martin said.

Missouri (22-9) has a chance to win a second straight tournament championship in a different league after winning the Big 12 tournament title last year. The Tigers play the late game Thursday night against either Auburn or Texas A&M, trying to improve after going 3-8 away from home in their new league.

“That would be a neat thing,” Missouri coach Frank Haith said of the opportunity. “Obviously, we’re excited about getting into tournament play. I look at our league … our league has gotten so much better as the year’s gone on.”

Nashville is hosting the SEC tournament for the fourth time since 2001, and the league plans to make itself at home in the Bridgestone Arena with this tournament the first of five here over the next seven years. Stallings doesn’t see any advantages for his Commodores playing so close to Memorial Gym, but he sees this as a nice spot for the SEC.

South Carolina coach Frank Martin pointed out playing in Kansas City didn’t help him when his Kansas State teams lost twice in the first round.

“Will their fans have more access to attend the game? Probably,” the Gamecocks coach said. “But heck, you can put Kentucky to play overseas, they’ll probably outdraw whoever they play against.”