Flu has struck 143 here so far 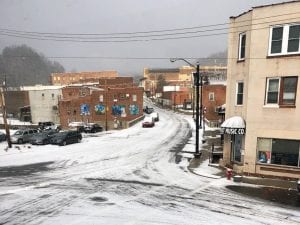 EXTRA SLIPPERY WHEN FROZEN — Traffic in downtown Whitesburg was mostly non-existent Tuesday morning after freezing rain followed by a small coat of snow left Main Street and other hilly streets too slick for travel. The sun eventually came out and the ice melted by early afternoon. (Photo by L.M. “Mike” Caudill)

Widespread flu has left 21 Kentuckians dead and more than 10,000 sick, as the number of cases of influenza has continued to rise across the state.

In Letcher County, there have been no deaths, but 143 cases of flu have been confirmed with laboratory tests, 17 in the last reported week alone.

Classes were canceled in schools here on January 17 as attendance dropped due to flu-like illness. The percentage of attendance had been in the mid to high 90s, but dropped steadily last week, said Debbie Cook, secretary to the director of pupil personnel. By January 16, the district was at 89 percent.

Dr. Fares Khater, infectious disease specialist at Mountain Comprehensive Health Corporation in Whitesburg, said it is still not too late to get the flu vaccine.

“The best way to avoid it is handwashing and get the vaccine,” Khater said. “Everyone should get the vaccine if they are over six months old, unless they are allergic or have some specific contraindication.”

He added that the flu vaccine is made from the dead virus, so it poses no risk of causing the flu. And, he said, even if someone takes the vaccine and still catches the flu later, their illness will be less severe than it would be otherwise.

“You do not get the flu from the influenza vaccine,” Khater said.

According to statistics from the state Department of Health, Letcher County has been better off than some surrounding counties. Pike County, which has nearly three times the population of Letcher County, had 101 new confirmed cases of flu during the week of Jan. 4 to Jan. 11, the last figures available, and a total of 452 cases this flu season. Perry County, which is slightly larger than Letcher, had 44 new cases and 639 total for the season. To the south, Harlan County, which is comparable in size to Perry County, has reported only two confirmed cases of flu for the entire season, and Bell County, the same size as Perry and Harlan, has reported five, two of which were during the week of Jan. 4-11.

Khater said he suspects the low figures from some counties are due to a reporting issue. The Centers for Disease Control list Kentucky as one of the top 10 states for the number of cases of flu, with the virus being widespread in the state. He said there are also additional illnesses — such as the common cold and the RSV virus — that can be mistaken for the flu if you look at symptoms alone, so patients should see a doctor and be tested.

Anyone who feels the sudden onset of flu-like symptoms — fever, body aches, nausea, diarrhea, headache or possibly sore throat — should see their doctor immediately, Khater said. New medicines are available for treating the virus, but only if administered within the first 48 hours after symptoms begin.

Tamiflu, which requires two doses per day for five days, has been available for several years, however new medication called Xofluza is now on the market. Khater said the new anti-flu medication requires on a single pill, but must be taken within 48 hours of the beginning of symptoms.