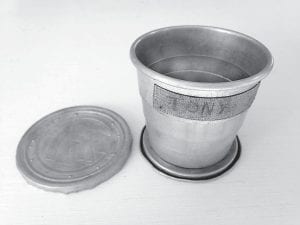 Based on a conversation with Kenneth Blair:

In its early days, Jeremiah’s Sycamore School did not have a water supply. Students carried water in buckets from the well of the school’s neighbor, John D. Dixon. To practice good drinking sanitation, rather than all students drinking from a single dipper, the dipper was only used to fill the drinking cup that each student was required to have. Many students folded a cup from a sheet of paper, and some students had aluminum “folding cups.” 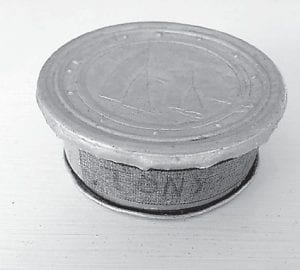 Tony Blair of Jeremiah provided these photos of his “folding cup” like those that were used at the Sycamore School and other grade schools in Letcher County to keep students from having to drink from a “single dipper” at the water well.

Some years later, a well was drilled in front of the porch of the school. At first, a hand pump was used to draw the water. By the time of my student days in the mid 1950s, the school had installed an electric pump and had a drinking fountain on the back wall of the porch.

Sycamore was heated in its early days by a coal-fired, pot-bellied stove in each room. At first, the coal to heat the stoves was piled on the ground between the well and the fence by the hollow. In the early 1940s, an area was dug under the Big Room to store the coal out of the weather. Sometime around 1950, this dug out area was enlarged into a partial basement and the school building was underpinned with concrete blocks.

During the 1952-53 school year, a coal furnace and ducts to vents in the floor of each room were installed in the basement. In 1955, a concrete block lunchroom was built and students no longer had to carry their lunches from home. Laura Fields Hampton, wife of Jeremiah postmaster George Hampton, was the cook that first year. Virgie Stacy did the cooking the following year. This lunchroom building still stands.

Just as their parents had done, the students walked to Sycamore through all kinds of weather and thought nothing of it. This was the time before school buses were in common use and before parents dropped off their children at the schoolyard. It was not unusual for some students to walk a mile or more. We walked a half mile out of the “holler” and another half mile up the highway, across a swinging bridge, up the railroad, and finally on a dirt road to school.

Like most grade schools throughout the county, Sycamore had a basketball team. To play a game against another school, the visiting team had to provide its own transportation, which was usually in the back of a truck. Sometimes it was a pickup truck; sometimes the team rode in a cattle truck or a coal truck. The games were played during the school day on outdoor dirt courts. A school played only a few games each year, mostly nearby schools. Sycamore’s opponents included Doty and Blair Branch, which were close by, and Carcassonne and Camp Branch, which were farther away.

One year, teacher Howard Caudill took the team to Jenkins to participate in a basketball tournament by cramming seven players in his four-door, two-seat, Model A Ford car. Since the roads were poor and the trip was long, the tournament was held in one day with some teams playing more than one game. Howard Caudill rented a nearby hotel room where his team could rest between games. This was the first time that many of the boys had been in a hotel room. Sycamore won the tournament that year by winning three games that day.

We students liked to play in the school’s basement during recess. The ceiling of the basement was low. One day an upper grade student removed the light bulb from its fixture fastened to the center of the basement’s ceiling. He and a few friends formed a line and held hands. He then announced that he was going to stick his finger in the light socket. He assured everyone that the only person who would feel the electric shock would be the last person in line and asked if any more students wanted to join the line. None of us did. He stuck his finger close to the light socket and the guy at the end of the line started grabbing at all of us little fellows. That terrified us something fierce; knowing that the boy at the head of the line was going to stick his finger in the socket just as the unlucky one of us was grabbed, making us the last person in the line and the only person to be shocked.

The guy doing the grabbing released his captive about as soon as he grabbed him (we thought that we had jerked free) and lunged at another person. There was quite a commotion in that basement that day with us runts desperately trying not to be grabbed.