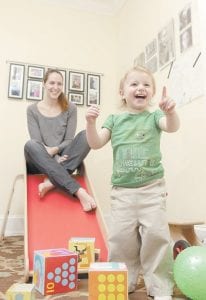 Roxy Sterbenz, 21-months, and her mother, Leni Calas, pose for a picture in their home in New York. That nonstop crying of a baby with colic has some parents turning to popular folk remedies. Unfortunately, there’s no good evidence they work, according to a review of 15 studies. The results don’t surprise New York City mom Leni Calas, 32. She tried many treatments studied, including fennel extract, sugar drops and massage, and says nothing worked for baby Roxy, who cried almost nonstop for six months. (AP Photo)

That nonstop crying of a baby with colic has some parents turning to popular folk remedies. Unfortunately, there’s no good evidence they work, according to a review of 15 studies.

“Our daughter would wake up and cry literally morning to night without napping,” Calas said. “She would just literally scream herself purple, and then throw up because she had been screaming so much.”

Calas said she and her husband couldn’t accept what doctors told them — that there was nothing wrong with their baby and that she’d outgrow the crying spells. But that’s exactly what happened.

And that’s what most doctors believe about colic, which affects up to roughly 20 percent of U.S. babies, usually in the first few months of life.

If a physical problem can be found, the condition is usually not considered colic. Gastric reflux and protein allergies are among conditions that can cause digestive upsets and crying spells in babies, and are often mistakenly called colic.

That may explain why some remedies thought to ease digestive problems may not work in babies with true colic, including alternative treatments containing fennel, herbal teas and probiotics, which all were included in the medical review.

Alternative remedies are not tested and approved by the federal government, and the purity and amounts of their ingredients are not always verified. Parents should always check with their pediatricians if they plan to give their children an alternative treatment, said Dr. Jatinder Bhatia, head of the American Academy of Pediatrics nutrition committee.

The study by researchers at the University of Exeter in England was published online this week in Pediatrics. The researchers analyzed results from 15 studies on various alternative remedies, massage and chiropractic methods advertised as effective against colic. Overall, almost 1,000 infants were involved.

Few of the studies were rigorously conducted and all had “major limitations,” the researchers said.

“ Thus, the notion that any form of complementary and alternative medicine is effective for infantile colic is currently not supported from the evidence” studied, they said.

None of the studies reported side effects, but one involving an herbal remedy listed vomiting, constipation and other symptoms possibly related to the treatment.

Although there were promising signs with a few treatments, including fennel extract, herbal teas and sugar solutions, better research is needed to provide conclusive evidence, said researcher Rachel Perry, the review’s lead author.

Her own two children had colic, but it disappeared around the time she tried giving them an over-thecounter herbal liquid promoted as effective against colic.

Because colic does go away on its own, it’s hard to determine whether specific treatments might work, she said.

“As a desperate mother, I can understand the sort of desire to try anything,” Perry said.

She urged parents not to give up, since it’s possible better designed studies on alternative remedies will show more definitive results.

Bhatia, a professor at Georgia Health Sciences University, said the study results don’t mean that none of the treatments will work for any baby. Some parents do report success with alternative remedies. Sometimes that might be because parents think it will work and they feel calmer, which can in turn calm the baby — a placebo effect. But even if there’s only a placebo effect, there’s no reason not to continue, as long as doctors have been consulted and the treatment is safe, Bhatia said.

Parents should always check with their pediatricians if they plan to give their children an alternative treatment, said Bhatia, For Leni Calas’ baby Roxy, now almost 2, the incessant crying spells tapered down and by 9 months disappeared.

Calas said she’s convinced of one thing “that no one wants to hear — that the only thing that really does cure it is time.”