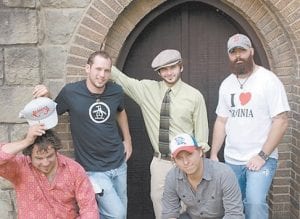 Folk Soul Revival will retun to Summit City for a Friday night concert.

Folk Soul Revival will return to Letcher County this Friday (Dec. 4) for their 10th performance in Whitesburg and their second headlining show at Summit City.

Since their beginning last November, the band has shared a concert stage with Jason Isbell, Mel McDaniel, John Cowan, The Felice Brothers, Tim Easton, Woody Pines, Chris Janson, and Justin Townes Earle among others. They have also performed at the Bristol Rhythm and Roots Reunion, Floydfest, The Blue Plum and M.A.R.R.S festivals, and have appeared on several local TV news shows and in an hour long performance documentary filmed at the historic train station in Bristol, Va.

Folk Soul Revival’s independently released debut album, “Good Enough,” was released in April and has been receiving good reviews since. A live EP followed and a new studio album is in the works.

Admission to Friday night’s show is $10 at the door. Local favorites The Benways will open.

For more info on both bands, visit myspace.com/folksoulrevival and www.myspace.com/ thebenwaysmusic.