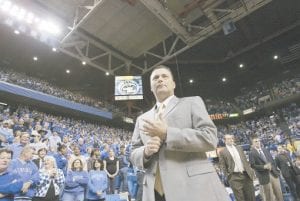 New Kentucky coach Billy Gillispie paced on the sideline of the Rupp Arena court prior to his team’s exhibition basketball game against Pikeville College in Lexington last week. (AP Photo)

Billy Gillispie came off as folksy and good-humored when the former Texas A&M coach was introduced as the new head coach at Kentucky during a giddy pep rally in April.

When sophomore guard Michael Porter was asked to name the funniest thing Gillispie has told the team on the court, Porter froze up. He couldn’t think of even one lighthearted quip.

“He just wants us to get out of our comfort zone,” Porter said. “Once he sees we’re going hard, he wants us to go even harder.”

Gillispie got chuckles from the media when he said the last time he cracked a joke in practice was about four years ago. He wasn’t laughing, though.

“I’m an extremely demanding coach in practice,” he said. “It’s hard to understand if a guy has a sense of humor if you can’t breathe because you’re nervous.”

The players say the early workouts have been fast and furious, and Gillispie says his team’s game pace will be as swift as his personnel will allow. That’s exactly what Kentucky fans want to hear.

Often Gillispie’s predecessor, new Minnesota coach Tubby Smith, was criticized for a sluggish tempo. With a guard-heavy lineup and few returning frontcourt scorers now that Randolph Morris is gone to the NBA, this Wildcats team should live or die with speed.

“We all pretty much want to run, so the system fits our team great,” sophomore center Perry Stevenson said.

That’s particularly good news for Ramel Bradley, who along with fellow guard Joe Crawford make up the Wildcats’ entire senior class. Bradley, who spent much of last year at shooting guard, will likely return to the point with Derrick Jasper’s status uncertain after offseason knee surgery.

Gillispie certainly has a reputation for developing guards. Last year, he led the Aggies to the Sweet 16 behind arguably the top point guard in the country in Acie Law IV. Not a bad resume, Bradley says of his new coach.

“It excites me a whole lot,” he said. “There’s a lot of guards in the country that want to be that next Acie Law, but I have the coach.”

Crawford, who often carried the team offensively from the wing last year when Morris got into foul trouble, is excited about Gillispie but acknowledges the coaching switch has meant numerous adjustments.

“It has been a tough transition,” Crawford said. “I was used to doing things one way for three years. I think it is a change for the better. He brings new ideas to the table and new life to the team.”

Two sophomores – and three if Jasper can return soon – will be counted on to keep the backcourt fresh.

Jodie Meeks, whose deadly 3- point shot often provided a spark off the bench, may get a chance to start this year. And Porter will be Bradley’s top backup if Jasper can’t go.

Kentucky’s chances of advancing beyond the second round of the NCAA tournament, where they’ve fallen the last two years to Connecticut and Kansas, likely depend on how quickly their big men can establish a force in the post.

Patrick Patterson is the school’s most-heralded prospect in years. He led Huntington High to three straight state titles in West Virginia and could be the power forward scoring threat Kentucky has lacked since Chuck Hayes played the position.

Patterson, who was the second bluechip recruit signed by Gillispie after Alex Legion joined the team, says he hasn’t regretted his choice of coach.

“He hasn’t lied to us about anything and always tells the truth, even if we don’t want to hear it,” Patterson said. “He’s down to earth and really wants to get to know us. We can introduce our friends and talk to him about anything.”

If Patterson plays forward, Stevenson may step up to the center spot vacated by Morris. Stevenson was a defensive force last year blocking shots and has been working on his shooting.

Sophomore forward Mark Coury also expects to get major playing time, as does junior center Jared Carter, provided his dislocated shoulder is healed. Sophomore Ramon Harris looked to be headed for plenty of time on the floor before a stress fracture put him on the bench for at least eight weeks.

Gillispie says he isn’t worried about his team lacking size, particularly on the defensive end.

“I think we’re going to have one of the best shot-blocking teams – probably the best I’ve ever had as a head coach,” Gillispie said. “Shot blocking can be good and bad, though. If they’re getting that close to the basket, maybe your perimeter defense isn’t as good as it should be.”

Gillispie has been embraced by the Kentucky fans, although he acknowledges the team hasn’t lost a game yet. As for the players, they say he’s been an effective – albeit sometimes stern – head of the family.

“Sometimes you have a dysfunctional family, a lot of kinds of families,” Bradley said. “We just want to be the best family. We want to be the TV family.”

The one that always finishes the show with a happy ending.