Follow in the steps of a “Top Chef” on NYC tour 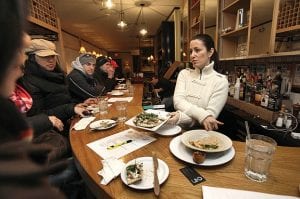 Nikki Cascone, right, a contestant on the fourth season of cable television’s “Top Chef,” meets with people attending “In the Steps of a Top Chef “ with City Food Tours, in her New York restaurant 24 Prince. (AP Photo/Richard Drew)

Why take a walking tour inspired by a cable series you’ve never seen?

If the series is Bravo’s “Top Chef,” then the tour will be about cooking and food. And that’s something most people can relate to.

“It’s a great concept, going around New York, tasting, talking to people, experiencing places,” said Anthony Tieu of San Francisco, one of eight people who showed up on a recent day for the tour, which is called “In the Steps of a Top Chef.”

Participants on Tieu’s tour were a mix of locals and out-of-towners, devotees of the series and folks who’d never seen it. But they had one thing in common: “All of us like food a lot,” said another person in the group, Susan Yun, a New York-based caterer.

The “Top Chef” series is a reality competition in which chefs are given cooking assignments, then judged by foodie superstars like Jacques Pepin and Lidia Bastianich. Each season is filmed in a diff erent city; the sixth season, set in Las Vegas, just concluded. The walking tour includes venues from the fifth season, which took place in New York. 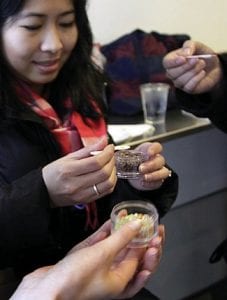 Elizabeth Lee, from New York, a participant of the City Food Tours “In the Steps of a Top Chef,” excursion, testing her food knowledge with other food tourists in New York. (AP Photo/ Richard Drew)

But the tour is much more than a series of tastings. It also includes tips, quizzes, history, and even a chance to meet a chef who was a contestant.

“I wanted to design the tour to be fun and interactive, like the show, and to really give people, in a fun and entertaining way, an idea of what it’s like to be a real chef,” said Joyce Weinberg, who off ers the “Top Chef” tour and other foodthemed tours through her company, City Food Tours.

In addition, Weinberg’s guides are all trained chefs. Yun and Tieu’s tour was led by Nicole Harnett, who offered commentary on everything from techniques for cooking chicken to the diff erences between cheeses from sheep, goats and cows.

As with many other tours inspired by TV shows, like “Sex and the City” or “Gossip Girls,” there is no formal relationship between the tour and the show. A spokeswoman for Bravo had no comment on the tour.

But one of the most popular stops on the tour is 24 Prince, a trendy bistro coowned by Nikki Cascone, a chef who was a contestant on the show.

The tour group sits at the bar, takes a trivia quiz, and enjoys snacks like flatbreads topped with cheese and veggies. Cascone drops by whenever she’s available to chat and share her experiences from the show, which included being vetted by lawyers and mentalhealth professionals.

“They don’t want us throwing knives at each other,” she explained.

While the show is being filmed, she added, contestants are isolated from the outside world.

“Someone’s telling you when to eat, when to go to the bathroom, you don’t know where you’re going or how much time you have,” she recalled. When the season was over, she kept having “nightmares about the clock.”

The tour itinerary may vary, but other stops include a Chinese bakery, a grand Beaux Arts building called Capitale where the show’s semifinal competitions were held, and a Little Italy store called Di Palo’s Fine Foods, where contestants shopped.

The tour starts outside the French Culinary Institute, where an event from the show was filmed and where Pepin is the dean. The takeaway tip here: The school restaurant, L’Ecole, off ers elaborate meals at a discount, prepared by students and instructors.

Last stop on the tour: ‘wichcraft, a restaurant owned by Tom Colicchio, head judge of “Top Chef.” Sandwich samples are offered along with a tasting quiz to identify a powdery red spice, various seeds and dried beans.

The top scorer wins a carrot peeler, and everyone goes home with a list of tips (heat your pan before adding oil, but not with butter), along with a packet of fancy gray Celtic sea salt.

The final tip from the tour guide: “Don’t waste the sea salt in water you’re boiling for pasta.”

IN THE STEPS OF A
TOP CHEF TOUR:
Threehour walking tour (with one short subway ride) in downtown Manhattan, inspired by the Bravo show “Top Chef.” Tour currently off ered Fridays and Saturdays, 11 a.m., but schedule subject to change; details from City Food Tours, www.cityfoodtours. com or 212-535-8687. Tickets, $45 plus $2 online booking fee.