Food City cashier honored for her work as volunteer 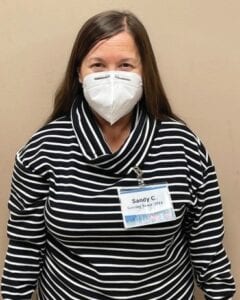 Sandy Cook has been named one of Food City grocery’s 12 district winners for “outstanding volunteerism.”

Cook won the District 1 award after being nominated for her volunteer work with four organizations in Letcher County — the Mountain Life Church, the Eolia Community Christian Outreach, the Letcher County School System, and the Shriners.

A Sunday school teacher since 1990, she is now a Sunday school superintendent, a youth choir director and projectionist in her church. Her duties in the various organizations with which she serves includes giving out monthly food boxes, assisting the elderly, and providing food, clothing and financial assistance to the needy.

In all, Cook donates a total of nearly 800 hours of her time per year to the four organizations.

The Varney Award is named in honor of the late Claude P. Varney, who served as president and board vice-chairman at Food City for 47 years. Varney was well known for his compassion for others and his humanitarian services.

Steve Smith, Food City’s current president and CEO, started the award after a 2002 White House meeting during which then-President George W. Bush called on corporate leaders from across the nation to participate in his “Businesses Strengthening America” volunteerism campaign.

Each year, special committees are established to review employee volunteer activities and select individual award recipients based on outstanding achievements in the areas of health, education, environment, cultural arts, recreation, heritage and history, and public service.