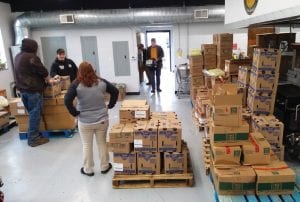 FOOD DONATIONS — Volunteer firefighters from around Letcher County moved boxes of donated food out of CANE Kitchen in Whitesburg to deliver to families around the county. The food came from Creation Gardens in Louisville, a high-end food service company that supplies restaurants across the United States. (Photo by Sam Adams)

Hundreds of boxes of food donated to Letcher County by a Louisville restaurant supplier were on their way to over 600 families in need Tuesday night.

Fire departments across the county picked up boxes of vegetables and milk from CANE Kitchen in Whitesburg, where the food was delivered from Creation Gardens in Louisville.

The food service company, which was founded in Louisville and sells under the trademark What Chefs Want, provides high-end foods to restaurants all over the country. With restaurants shut down to dine-in service due to the COVID-19 virus, much of the food that would have been sent to restaurants was sent here instead.

In addition to the families served through that donation, those who are out of work because of the pandemic can go to the Letcher County Food Pantry for help with food, and senior citizens can still call the Letcher County Senior Citizens at the Recreation Center in Whitesburg.

Only 38 senior citizens had received food through the Senior Citizens Program as of Monday, and the budget there is already strapped. Debbie Baker, who is in charge of the county’s program at the Recreation Center, said there were 11 people receiving meals prior to the pandemic, and 17 that were on the waiting list were picked up. Another 10, who were attending meals at the center, have also received meals and are being check on by center staff, Baker said.

“We are calling all the senior centers to make sure they have food in the house,” Baker said. “If they don’t, we’ll find a way to get food to them.”

Some of the food came from the CANE Kitchen in Whitesburg, some was purchased through the Kentucky River Area Development District, which runs the program here, and some was from a food pantry maintained by the senior citizens program. Food in that mostly came from a food drive by county officials and Girl Scouts last year.

“I’m not one to pat anybody on the back, but I have to give the judge and the magistrates credit. They really stocked our pantry up good, but now it’s getting empty,” Baker said.

Gov. Andy Beshear highlighted CANE Kitchen in his nightly presentation Tuesday along with others in eastern Kentucky that have been providing meals for seniors.

At the Letcher County Food Pantry, director Vicki Holbrook put out a notice on her Facebook page for friends to spread the word that the pantry is open during the crisis. Part of that was to let people already signed up know that the food pantry is still open, but it is also to let others know.

“We did some rearranging in the pantry, to keep people from being so close together, and from being too close to us,” she said.

The pantry is in a small house on Madison Street in Whitesburg, but she said it is well stocked at least for the time being. She urged those who are out of work or working reduced hours to sign up for help.

“Think of me as a safety net — once you’re signed up, you can come for a year. Not everybody comes every month,” she said.

The service will also provide food to people who have a sudden emergency. She said the First Church of God in Neon is also helping those in need in that area.

“Nobody in this county, that we can help, is going hungry,” Holbrook said.

One thing the pantry is not as sure about since the emergency is bread.

“Food City and Walmart used to keep us in bread, we never had to worry about bread, and now they don’t have any,” she said.