Local volunteers hand out 188 boxes of food in 9 hours 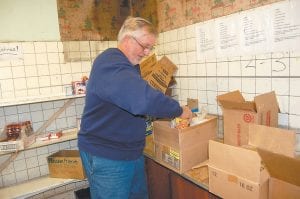 Volunteer Randy Craft, of Whitesburg, placed canned beans in a box of food at the Letcher County Food Pantry. The number of people picking up boxes has increased lately as more people are laid off from work and as 2015 is coming to an end.

The Letcher County Food Pantry gave out 188 boxes of food in the nine-hour period it was open last week.

“The need is increasing and these months approaching will be some of the busiest for the whole year,” said Jerry Utt, secretary and treasurer of the Letcher County Food Pantry.

Volunteers continuously handed out boxes of food on Friday, while another volunteer packed more boxes.

“Every time there is a layoff, there are more people coming in,” said Holbrook.

The food pantry has received 34 new applicants in November.

“We lose some (applicants) and we are getting new applications each month,” said Tom Watko, co-director of the Letcher County Food Pantry.

The Letcher County Food Pantry has a base of about 1,500 people, but not everyone gets food each month. The food pantry uses a filing card system to keep track of who picks up food and when they do it. Recipients show proof of identification and sign for the food.

Clients will soon complete paperwork for 2016 and the food pantry will implement a new system. Participants will be given a card to bring to the food pantry each month and a volunteer will punch a hole in the card each time a client picks up food.

Applicants are allowed one box of food each month to supplement what people have in their cabinets or the food they plan to buy at a grocery store.

Those interested in getting food from the pantry are required to apply at Leslie-Knott-Letcher-Perry (LKLP) Community Action Council offices at 2 Main Street in Whitesburg. An interview is conducted to determine whether the person meets eligibility guidelines. Since the food pantry receives some commodities through God’s Pantry Food Bank, federal guidelines are followed.

The food pantry buys the majority of its food from God’s Pantry Food Bank in Lexington. It also receives donations from Walmart and Food City.

Boxes of food vary depending on the number in households. Depending on availability, boxes usually contain cereal, a meat product (frozen or canned), cheese, soup, crackers, fruit juice, water, canned drink and vegetables. Extra items may include cookies, chips, doughnuts or other items donated to the pantry.

Holbrook said peanut butter and dried beans are staples that the food pantry is in need of.

The food pantry started in the late 1970s after Blue Diamond Coal Company was fined for the Scotia mine disaster. Part of the settlement went to a community service project.

People have begun asking for hygiene and toiletry items such as shampoo, soap, toothpaste and razors and Holbrook said the food pantry will gladly accept donations of toiletry items to give to clients.

“We want to thank all our volunteers who come out every week, and this includes a group of volunteers from the drug court,” said Utt. “Many churches support the program with volunteers and with donations. We receive donations from local businesses and others. We’re grateful for all those who help us and help those in need.”

The Letcher County Food Pantry, located at 204 Madison Ave., is open from noon until 3 p.m. Wednesday through Friday. It is operated out of a house owned by Whitesburg First Baptist Church, which also pays the water and electric bill.

The Letcher County Food Pantry serves residents who live from Millstone to the Perry and Knott county lines. Food pantries are also located in Fleming-Neon, Eolia, Jenkins and Blackey.

Emergency boxes are given to people whose houses have burned or to people who receive emergency care of family members through court orders.