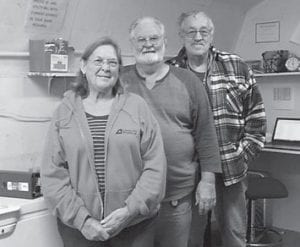 God’s Food Pantry in Jenkins was opened by David Little. Since his death in 2015, Jackie and Lester Robinson and Kenneth “Jabber” Blair have keep the food pantry open.

When David Little started God’s Food Pantry four or five years ago, he began with nothing except faith. He emptied his little 12’x16’ storage building in his yard and installed lighting, heating and shelving. The store is located in No. 3 Hollow in Jenkins.

He was never shy about asking for donations and soon the shelves were filled with cans of food and several people who were touched by his kindness gave monetary donations too. Many days there would be 15 to 20 families who came to him for help. Little was diabetic and had one leg amputated and fitted with a prosthesis, yet he would still hobble to his storehouse and try to help each family as much as possible.

As donations poured in it became necessary to expand the facility. With the help of volunteers from Cornerstone Ministry Center from Seymour, Ind., an addition was built onto the existing building. With the donation of a refrigerator and freezer he was able to provide fresh meats and vegetables as well as canned food.

Little kept meticulous records of every cent received and spent, and searched for places to buy food at the best prices. On occasion he would get volunteers to travel as far as Kingsport, Tenn., to get van loads of peanut butter, sugar or other food staples.

With limited resources it became necessary to limit each family to one visit per month. Little said that on one occasion a lady came to his store for help. “I could tell that she was very proud but very needy too. She had her young daughter with her. As I filled bags with food she opened a can of Vienna sausages and she and her daughter ate them there. They said they had not had anything to eat in three days.”

Little died in 2015 but his friends and family are making sure that his project continues. His neighbors, Jackie and Lester Robinson and Kenneth “Jabber” Blair, take primary responsibilities for buying food items and keeping the store open Mondays, Wednesdays and Fridays from 11 a.m. to 3 p.m. Twice each month they make trips to Hazard to pick up a truck and trailer full of food purchased from God’s Pantry Food Bank in Lexington.

The Kiwanis Club of Jenkins will be conducting a food drive November 27 through December 2 to help restock the food pantry. Boxes will placed at several locations in town for donors to drop off food items and toiletries. Among the items needed are canned fruits, vegetables, meats, soups, peanut butter, crackers, cereals, sugar, jams and jellies. Also needed are hand soap, bath soap, laundry detergent and toothpaste. Anyone who would like to make a monetary donation can take or send it to Community Trust Bank in Jenkins to the God’s Food Pantry account.

The places that are participating in the food ‘drop off ’ collections are: Jenkins Fire Department, Jenkins branch of Community Trust Bank, Cash Express, Jenkins City Hall, Boggs Pharmacy and Reflections in Whitesburg Plaza.