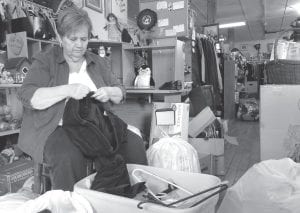 Cleda Turner, director of the Owsley County Outreach, folds clothes at the thrift store in Booneville in Owsley County, where food stamp cuts are taking their toll. (AP Photo/Dylan Lovan)

Rosanna Troyer is coping with the drop in her monthly federal food assistance from $367 to $303 by cutting back on meat purchases and buying more canned goods and macaroni and cheese.

Her 12-year-old daughter is already sick of the hot dogs they’ve been eating frequently at their home in Owsley County, which has the lowest median household income of any U.S. county outside Puerto Rico.

“She says ‘mom, can’t we have something else? I told her, you got to wait, maybe next month,” said the 36-year-old Troyer.

Troyer is one of the more than 47 million Americans who receive food stamps, all of whom saw their allotment drop on Nov. 1 as a temporary benefit from the 2009 economic stimulus package ran out. Few places feel the difference as profoundly as Owsley County, an overwhelmingly white and Republican area whose own representative in Congress voted against renewing the benefit. Food stamps are vouchers that can be used to purchase groceries.

The drop came ahead of the 50th anniversary of President Lyndon Johnson’s call for a “War on Poverty,” an initiative aimed at expanding the government’s role in education and health care as poverty reduction strategies. The food stamp program grew out the initiative Johnson launched with his Jan 8, 1964, speech.

The programs played a role in bringing Owsley County and other parts of Appalachia out of what has been described as “third-world conditions” where people died of starvation, said Jason Bailey, director of the Kentucky Center for Economic Policy in Frankfort.

“The absolute level of poverty is better,” Bailey said. “But, the gap between central Appalachia and the rest of the country has not closed. In a relative sense, it’s just as big.”

Across Kentucky, nearly 900,000 people who need food stamps saw a proposed cut of $40 billion from the food stamp program, also known as the Supplemental Nutrition Assistance Program. And, with the cut in benefits, it appears the gap will widen, particularly in a place like Owsley County in a rural, poor area in Kentucky’s Appalachian foothills, said Jason Dunn, director of the Division of Family Support for the Kentucky Cabinet of Health and Family Services.

Owsley County, home to 4,722 residents, is poor even by Appalachian standards. Its median household income of $19,351 is the lowest outside of Puerto Rico, according to census results. The county is more than 99 percent white. Republican presidential candidate Mitt Romney received 81 percent of the vote in Owsley County to 18 percent for Democratic President Barack Obama in last year’s election.

In 2009, the last year available, government benefits accounted for 53 percent of personal income.

Over 41 percent of residents four in 10 fall below the poverty line. In 2011, the most recent year available, 52 percent received food stamps.

“It’s a very poor county and I see a lot of people struggling, I mean it isn’t a day you see somebody, pushing strollers or a cart down the street trying to find pop cans so they can take it in … to get a little bit of change,” Troyer said. “It’s tough.”

Republican U.S. Rep. Hal Rogers, who represents the 5th Congressional District that includes Owsley County, voted not to renew extra funding for the food assistance program that had been allocated as part of the federal stimulus in 2009 a vote critics called a cutback even though it affects about a third of his constituents. Rogers said the program is needed in eastern Kentucky, but is also badly in need of reforms to keep “scammers, lottery winners, gamblers and others who may be able to work” out of the program. Rogers won re-election in 2012 with 84 percent of the vote.

Conservatives are pushing cuts as they seek to target benefits to the neediest people, arguing that those who are truly hungry should have no problem getting assistance if they apply. The final bill will most likely crack down on states that give recipients $1 in heating assistance in order to trigger higher food stamp benefits. Republicans say anyone who truly qualifies for a higher benefit still can get it through SNAP.

Republican State Sen. Robert Stivers represents Owsley County and the neighboring area. Stivers said food assistance and other War on Poverty programs have helped some people break the cycle of poverty, but left others “accustomed to it and created a cycle of dependence.”

Stivers said dependence caused by food stamps and other assistance has led to a devaluing of education among some recipients and contributed to drug abuse in the region.

Cleda Turner, the director of the Owsley County Outreach charitable organization, sees the poverty every day. The Outreach center packs food backpacks weekly for students identified by schools as being in need. The backpacks, which contain non-perishable foods such as peanut butter and boxed goods, are given out on Friday to ensure the children have food on the weekends when they can’t get free meals in their schools.

“In the winter time there is always a greater need,” said Turner, a native of the county. “There’s a greater need for covers, like blankets and quilts. There’s more need for food because of the heat bills going so high.”

Turner has spoken with families who have seen food stamps cut by $200 per month. In some cases, Turner said, senior citizens are being forced to decide between buying medication and paying for food.

“And a lot of them do without medicines because they can’t afford them,” Turner said.

Troyer, who has been receiving food assistance for two months, says she is finding ways to shop smarter, make due with what is available and learn to love hot dogs.

“I wasn’t really surprised, I just kind of grin and bear it, you do what you can do, that’s about it,” Troyer said.