For a guy always in control, Clemens makes strange choices 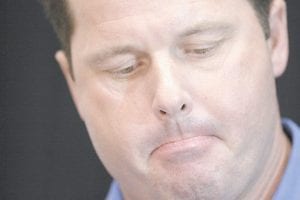 Roger Clemens listened to his lawyer speak during a news conference about alleged steroid use Monday in Houston. (AP Photo/David J. Phillip)

He will never get the benefit of the doubt now.

That’s because, simply put, there’s no longer much doubt at all.

Roger Clemens took care of that at a news conference Monday night he called himself. It was a strange decision for a man who built a Hall of Fame-worthy resume on a cornerstone of control. Stranger still was Clemens’ decision to play a tape recording of a 17-minute telephone call between himself and Brian McNamee, his trainer of 10 years.

For those of us who wanted to believe Clemens, he came off sounding like nothing more than a bully.

It might have been the worst defensive maneuver since the French erected the Maginot Line before World War II.

The recording was painful to listen to, but almost as painful to watch was Clemens’ reaction. He sat on the podium, impassive, staring straight ahead as McNamee pleads pitifully, over and over, “What do you want me to do?”

Clemens responded that’s the reason he was willing to talk to McNamee. “Like I said, I’m telling the truth and I want it out there,” he said.

But Clemens did not press McNamee forcefully enough about the allegations. More than once you expected to hear an angry Clemens scream, “why did you lie.” But it never came.

And McNamee, tellingly, does not respond even once in a way that suggests he would change his side of the story.

“Tell me what you want me to do,” the trainer said again. McNamee is clearly distraught, saying he’s lost his wife and kids.

There are at least two ways to interpret the exchange. One is that Clemens, who plucked McNamee from a clubhouse job in Toronto and provided him with steady work and a good living for 10 years, is the kind of guy who doesn’t abandon his friends in times of need. It fits with just about everything else we know about the man.

A second, more cynical way to look at the exchange is that Clemens is suggesting he would look after McNamee’s family if the trainer did go to jail – a possibility now that Clemens has filed a defamation lawsuit against that same friend. But that’s hardly the only gray area.

Clemens was forceful and believable at times Monday, just as he was during an interview on “60 Minutes” the night before. It was heartbreaking when he told Mike Wallace that he understood his reputation was sullied forever. And his defiance during a question-and-answer session during the news conference, while late, was welcome.

“Do you think I played my career because I’m worried about the damn Hall of Fame?” he said. “You keep your vote. I don’t need the Hall of Fame to justify that I put my butt on the line and I worked my tail off, and I defy anybody to say I did it by cheating or taking any shortcuts, OK?”

But McNamee faces a fate much worse than losing his good name if he’s lying. Besides, Andy Pettitte, Clemens’ closest friend in the game, already has acknowledged that McNamee was telling the truth about injecting him with human growth hormone. It defies common sense that he would be honest about Pettitte, yet sell Clemens, the man who helped make his career, down the river.

Then there’s the timing of Clemens’ defense. First, he passed up a chance to answer the charges before the Mitchell Re- port was issued almost a month ago. That’s understandable, if Clemens’ assertion is true that he was never told what investigators planned to ask him about. But issuing his defense piecemeal after that did Clemens little good.

First came the flat-out denial, then the amended version that McNamee had injected him, but with lidocaine and vitamin B-12. Now, we have Clemens intimidating a former employee in what sounded like a choreographed conversation; especially after learning Clemens taped the call and had legal counsel standing by. If he thinks that was the way to advance his case in the court of public opinion, he’s wrong.

The next round is scheduled for Jan. 16 before the House Committee on Oversight and Government Reform, where both men must repeat their versions under oath. For once, somebody else will be in control.

That isn’t the first questionable assertion to come out of Clemens’ mouth. The troubling part is that it might not be the last.

Jim Litke is a national sports columnist for The Associated Press. Write to him at jlitke@ap.org