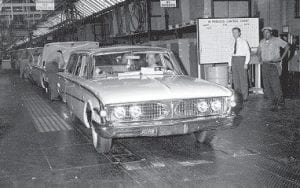 The last Edsel to be built, a tan station wagon officially referred to as job number 344, rolled off the Ford Motor Company assembly line with no fanfare in Louisville on Nov. 20, 1959. The ill-fated Edsel model line became synonymous with marketing failure. (AP Photo/H.B. Littell)

Before the Ford Pinto, AMC Pacer and Chevy Chevette, there was the Edsel.

It was a vision of Detroit at its mid-20th century worst, an overhyped, overpriced automotive monstrosity produced by the Ford Motor Co.

The oval front grill was ridiculous — some suggested it looked like a toilet seat. The workmanship during the first model year was mediocre and the vehicle became a national joke. The car was named after Henry Ford’s son, Edsel.

It was introduced in September 1957, became an almost overnight automotive bust and was quietly shelved Nov. 19, 1959. There, the story might have ended, an American dream turned to American rust.

But in this country, there are many people who love the unloved, especially when the object of their desire packs eight cylinders under the hood.

David Hooten is one of those whose heart flutters at the sight of an Edsel. He is the president of the Wisconsin Edsel Club, which has about 30 members.

This week, Hooten will join a few dozen other Edsel enthusiasts from around the country in making a pilgrimage to Louisville. At the site of an old Edsel plant, they’ll celebrate the 50th anniversary of the car’s demise.

“The car had such a bad rap,” Hooten said. “I bought one just to be different.”

Just how different can be found inside his garage.

Hooten owns an exquisitely restored Edsel from the final model year, 1960, when the last of the vehicles rolled off the assembly line.

It is an Edsel Villager, a twodoor station wagon with a tailgate.

For an 18-foot-long, 4,100- pound vehicle with flat bench seats and no seat belts, it doesn’t handle too badly.

It goes from zero to 60 in about 15 seconds and, amazingly, gets around 15 miles per gallon in highway driving.

And, given that the steering wheel is roughly the size of a tire, it’s pretty easy to maneuver around town.

It seats six comfortably. A third seat row pops up in the back and faces forward.

The body is painted polar white, a stark contrast to the cadet blue roof.

There’s no shortage of chrome to accentuate the lines. The car has not one, but two fender ornaments

Hooten, who is 49 and works as an auto body mechanic, has been driving Edsels since he was a kid in high school.

He really sticks to his belief that the cars got a bad rap.

For Edsel enthusiasts, there really is a certain beauty in the vehicle and sadness about the failure of the car to find a market.

But the brand’s biggest problem may have been marketing — there were too many teasing magazine ads that only hinted at what the car looked like.

“The way the car was advertised, it was to be so new, so wonderful,” Hooten said. “And it turned out to be just a regular car.”

The car cost Ford millions of dollars at the time.

Beyond becoming a punch line, though, the Edsel provides a reminder that Detroit has miscalculated mightily in the past only to rebound. That’s something to take comfort in during a time of auto bankruptcies and cash-forclunkers sales.

The Edsel is gone and Ford survives.