Ford gets the aluminum F-150 ready for prime time 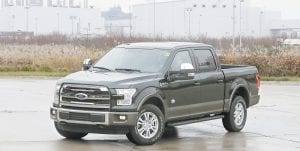 Russell Barnett, a Ford dealer in Tennessee, is ready for aluminum.

Ford is using the metal almost exclusively in the body of the 2015 version of its best-selling F-150 pickup, which will arrive at dealerships next month. Barnett is already answering customers’ questions about the truck, and he’s updated his repair shop not only for the F-150, but in anticipation that other Ford vehicles will eventually make the switch from steel.

But just in case, he ordered some extra steelbodied 2014 pickups.

“ There will be some people who won’t want to change for a while,” says Barnett, who says pickups make up around half of the annual sales at his dealership in rural Winchester.

Ford is doubling down on aluminum, which is lighter and more expensive than steel but just as tough. The new truck is the company’s response to customers’ requests for a more fuel-efficient and nimbler pickup. Ford hopes the advantages outweigh customer doubts about the durability of aluminum or potential repair costs for the pricier metal.

It’s a big risk. So far this year, one out of every three vehicles Ford sold in the U.S. was an F-Series pickup. Morgan Stanley estimates F-Series trucks account for 90 percent of Ford’s global automotive profit.

On Tuesday, Ford kicked off production of the new truck at its Dearborn Truck Plant, four miles from the company’s headquarters.

“Yeah, this is a risk, but it’s one well worth taking.” said Bill Ford, the company’s executive chairman, as he stood alongside the assembly line. “For our customer, this is a big, big leap forward.”

The F-150 has been the best-selling vehicle in the U.S. for 32 straight years; last year, Ford sold nearly 100,000 more full-size pickups than General Motors.

Aluminum isn’t new to the auto industry, but this is the first time it will cover the entire body of such a highvolume vehicle. Ford made 647,697 F-150 pickups at its two U.S. plants last year; that’s one every 49 seconds.

If Ford’s bet pays off, it could pad its lead in the lucrative truck market. More importantly, aluminum “future proofs” the truck — and the company — in an era of rising fuel economy standards, says Karl Brauer, a senior analyst with Kelley Blue Book.

Ford will announce the truck’s fuel economy figures later this month. The company says the 2015 truck will have from 5 percent to 20 percent better fuel economy than the current version, which gets up to 23 mpg. A figure in the higher end of that range might convince some buyers to switch brands, says Jesse Toprak, chief sales analyst for the car buying site Cars.com.

“If I own a business and if I look at the numbers, and it’s going to add up over time, then I’ll think twice about it,” Toprak says.

Ford has the disadvantage of introducing the truck as gas prices are hitting a four-year low. But CEO Mark Fields says even when gas prices were $1.25, truck buyers still asked for better fuel economy.

“These vehicles are not just vehicles to our customers. They’re tools to help them do their job,” Fields says. “This thing has to deliver.”

Toprak believes Ford’s biggest risk is the unknown. Truck buyers simply don’t know how an aluminum body will hold up over time.

When Ginny Pruet, who runs a wedding rental business in Rockwall, Texas, decided to trade in her 2012 F-150 to get one with a backup camera, she chose a 2014.

Pruet, 54, has checked out the 2015 version at auto shows. She is impressed by the new truck’s bells and whistles, like the movable LED spotlights on the side mirrors. But she’s concerned that aluminum is untested and not worth the extra cost. Ford has raised the price of the base model by $395 to $26,615, including destination fees. A fancier King Ranch version costs $3,615 more.

“We’ll just hold off and find out the reaction to it,” she says.

As with any new vehicle, marketing will be key. Toprak says Ford should promote a major advantage of an aluminum body: It won’t rust.

John Krafcik, the president of the car buying site TrueCar.com, points to the truck’s capability. The F-150 sits on a high-strength steel frame that’s carrying less weight from the truck, so it can carry more cargo and haul heavier trailers. The new F-150 can tow up to 12,200 pounds compared with 12,000 for the Silverado and 10,500 pounds for the Ram.

Ford is spending more than $1 billion to retrofit both assembly and metal stamping plants. At the Dearborn Truck Plant, 500 new robots now quietly rivet aluminum parts together; next door, at its stamping plant, the company is saving money by recycling aluminum — another advantage over steel. Ford also helped dealers such as Barnett with the $30,000 to $50,000 cost to retrofit their repair shops, says spokeswoman Elizabeth Weigandt.

Ford took steps in the design of the truck that minimize repair costs, Weigandt says. Because of the way the aluminum is sectioned, for example, the roof doesn’t have to be removed to repair to the B-pillar, which sits just behind the front doors.

Truck buyers are among the most loyal in the industry, so Ford can count on some to make the switch to aluminum.

Jason Cannon, 34, a writer who lives in Demopolis, Alabama, has driven pickups all his life. He would like to get better fuel economy than the 15 to 16 mpg he averages driving his 2006 pickup around town. That’s why he’s eyeing the 2015 F-150 with the 2.7-liter EcoBoost engine, a V6 that could give him similar horsepower to his current V8.