Ford pulls plug on the Edsel 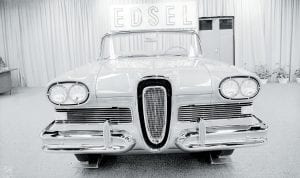 On November 19, 1959 — 57 years ago this coming Saturday — Ford Motor Company announced it was ending production of its ill-fated Edsel brand of cars. Production of the Edsel, named in honor of former company president Edsel Ford (and a son of founder Henry Ford), began in Louisville in the fall of 1957. Two years later, the company had lost today’s equivalent of $2.6 billion on the car, which the website Wikipedia now calls “a popular symbol for a commercial failure.” Pictured above is the Edsel Citation convertible on display in the fall of 1957. Pictured below is the rear end of the Edsel Citation 4 door hard top. Both were at a car dealership in Detroit, Michigan. Wikipedia points out that the Edsel is a valuable collector’s item today, commanding prices of more than $100,000 for a mint-condition covertible. (AP Photos) 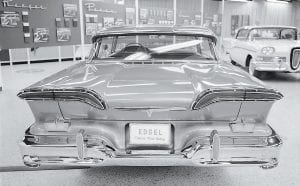