The weekend started on Cowan Creek with a rainbow. The photo was taken by Carla Smith from her front yard.

Happy birthday to my Great-Aunt Virginia Brown. She was 95 years old on Tuesday, April 15.

Also, my daughter Morgan Eldridge will be 25 on April 19. Happy birthday, ‘Morgie.’ I love you so very much.

Congratulations to Hassie Wright and her son T.J. She is a proud mother to Alexis Shae, who was born Friday, April 11. I stopped by to see her at the hospital last Sunday.

On Sunday, April 13, the First Baptist Church of Whitesburg has a children’s Easter musical called “It All Happened in the City”, created by Dennis and Nan Allen and directed by Mitzi Kincer of Cowan Creek, Wendy Little of Whitesburg, Pam Pratt of Mayking and Debbie Frazier of Whitesburg.

The FBC Children’s Choir was awesome. I noticed our very own Cowan Creek’s Maggie Little participated. She is a daughter of Phillip and Beth Little of Cowan Creek.

Friday evening our weekend started off with a beautiful rainbow that showed off our beautiful mountains. Then Saturday morning our faces went from smiles to a frown. Fires everywhere. 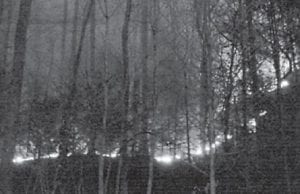 This is the scene behind Doris Ison’s daughter’s house after the forest fire this weekend on Cowan Creek had burned the right side of the hills and crossed over to the left. Byron and Morgan Eversole’s home was surrounded by fire and Cowan residents were worried. (Photo by Carla Smith)

We all are mentally drained from the worry of what IF? But we kept the faith and continue to pray for the rain that was to come.

Donna and Mike Watts and a couple of friends were going to ride their bikes on Sunday over Pine Mountain and Little Shepherd Trail, but they got turned around by the forest rangers due to the fires. Donna said the smoke went under her faceshield and at times it was hard to breathe.

A big thank you to Jeremy Collins of Cowan. “Some gave all,” and he did! Thank you, Jeremy.

In the middle of last week, Doris Banks told me that Aunt Virginia Brown had a surprise visit from Aunt Janice and Uncle Ron Wolod of Maryland; Aunt Thelma Grace Ison of Flemingsburg; cousins Duane and Anna Younts of Little Cowan; and Carol Banks Caudill of Little Cowan. They brought a feast. She said Aunt Janice had not felt too well. Uncle Glenn B. Ison was at the farm on Kingdom Come Creek. 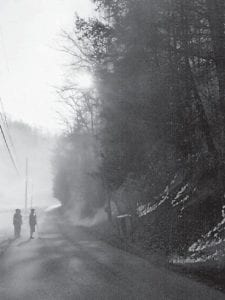 Robbie, Ernie, Carla and Raven Ison volunteered to turn traffic around for three hours. Fire trucks were a half mile down the road from the roadblock. The photograph was taken in front of Raven and Ernie Ison’s house on Sunday.

Get well wishes to Carol Banks Caudill. I was told he had had a car accident and was in for rehab at Health South in Bristol, Tenn. Prayers are appreciated. I read just now on Facebook that she is home with a cracked pelvic bone and Linda Lucas said she had a long way to go with her arm, and she is coming in to take care of her sister.

Welcome home, Linda. We miss you here on the creek.

Get well wishes to Christina Bolton’s daughter, Kylie Cornett. She is 11 years old and broke her arm. Kylie is Bennett and Linda’s greatgranddaughter and lives in Berea.

Our prayers to John Williams’s family.

Arminta Ison Jenkins of Texas has her niece Kim visiting her and she is going to the NASCAR races.