Foresters on guard against ‘tree of heaven,’ other invaders 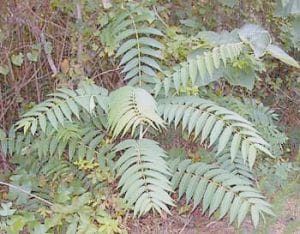 The Ailanthus altissima, a trash tree better known as the “tree of heaven,” is spreading rapidly in bottoms and on hillsides in Letcher County and in other parts of Kentucky and the U.S. (Photo courtesy Duke University)

In the past anyone considering a career in forestry had fairly simple issues to address: Helping loggers understand how to most effectively cut timber and plant replacement trees, plotting strategies for helping forests recover from fires, observing the impact of human development on woodlands.

Today, the profession has changed to one of constant vigilance against a variety of threats to Kentucky’s forests.

Steve Bullard can tick off the names of invaders looking to cut a swath through the Bluegrass State’s woodlands.

And, surprisingly, not all of the threats are insects that consider a tree a tasty lunch.

“There are quite a few invasive plants out there that can make problems for our native tree species,” said Bullard, chairman of the Department of Forestry at the University of Kentucky.

“We’re seeing a lot of problems with the so-called ‘tree of heaven,’ which I call the Chinese stink weed. It grows quickly and can crowd out native trees,” Bullard said.

Other plant enemies of trees include various oriental ground covers that were brought here innocently but have proven to be aggressive enough to keep native seeds from growing into healthy trees.

It is not only the trees that suffer. People whose livelihoods depend on healthy forests can find their work opportunities constricted and their incomes impacted.

Then there are the microbial assaults like sudden oak death syndrome. Bullard said no cases have been reported in Kentucky.

“But conditions in Kentucky would be good for it. So far, we’ve been able to keep it out,” he said.

Other invaders are poised on Kentucky’s borders, like the emerald ash borer, an Asian insect that was first noticed in Detroit less than a decade ago. In only a few years, the bug has gnawed into ash trees in Michigan, Indiana and Ohio.

It has been spotted near Cincinnati, a fact that’s put Kentucky’s foresters on alert. They urge homeowners not to import ash trees and firewood from our northern neighbors in order to keep out the eggs and larvae of this borer.

Hemlock trees in eastern Kentucky aren’t as lucky as ash trees have been so far. The hemlock wooly adelgid has arrived.

“This is another exotic insect that we have no natural way to control. It’s a big problem in the Great Smoky Mountains in east Tennessee,” Bullard said. The bug lays its eggs on the underside of hemlock branches, where the nymphs and larvae feed.

“It’s just come into Kentucky in the last year, when we started noticing it in hemlock stands,” Bullard said.

He noted the UK Department of Forestry participates in the statewide Kentucky Forest Health Task Force, an organization of several state, federal and private entities with strong interests in forest health issues in the Bluegrass State. Information about the task force is available online at www.kyforesthealth.org.