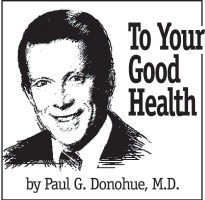 DEAR DR. DONOHUE: Have you any information on the Norwalk flu? My grandkids were all sick with it last week – vomiting and diarrhea. One had to be taken to the hospital because of a high fever. – M.C.

ANSWER: The Norwalk virus – so named because it was first isolated in Norwalk, Ohio – is now called Norvovirus. It’s one of the most common causes of infectious diarrhea, and the infection is not limited to children. It’s the virus responsible for ruining many people’s vacations when it races through cruise ships.

After a relatively short incubation period (the time from the virus’s entry into the body until the appearance of symptoms) of one to two days, infected people begin to have diarrhea, sometimes accompanied by stomach cramps and vomiting. Body temperature rises, and headaches are another feature. The illness lasts, on average, two to three days, but some are ill for as long as one month.

There is no special medicine for the infection. Lowering body temperature, when indicated, and making the person comfortable are two treatment goals. The most important aspect is to keep the infected person – adult and especially child – hydrated, since so much fluid is lost in the diarrhea stools.

The virus can be passed through food and drink, and from person to person. It’s all over. Outbreaks are common in the military and, as I mentioned, on cruise ships. It takes only a few viruses to establish an infection, and that’s why it is so catchy and spreadable. One outbreak occurred during a college football game among players on both sides who neither shared food or drink nor had contact with each other except for game time.

Care if I make a picky point? This isn’t the flu. Flu is a respiratory illness with cough, muscle pain and fever. People use the term “intestinal flu,” but that’s a misnomer. I make the point only because many people who receive the flu vaccine and then later develop diarrhea blame it on the flu. They say the vaccine didn’t work. They’re wrong. They’re talking about a different illness, perhaps a Norvovirus infection.

DEAR DR. DONOHUE: I take Metamucil for constipation. I have had regular bowel movements since starting it. A few days ago, I had a sharp, intense pain during a bowel movement. Now every time I relieve myself, there is bright-red blood present. I don’t have any pain, but there is an enormous amount of blood there. Will this clear up on its own? – T.J.

ANSWER: Don’t take a chance on something like this clearing up by itself. The kind of bleeding you describe could well be due to something innocent, like hemorrhoids, but the cancer issue has to be investigated quickly. Metamucil is not responsible.

Colon cancer is one of the most common cancers. The booklet on it provides information about its detection and treatment. Readers can order a copy by writing: Dr. Donohue – No. 505W, Box 536475, Orlando, FL32853-6475. Enclose a check or money order (no cash) for $4.75 U.S./$6 Canada with the recipient’s printed name and address. Please allow four weeks for delivery.

Dr. Donohue regrets that he is unable to answer individual letters, but he will incorporate them in his column whenever possible. Readers may write him or request an order form of available health newsletters at P.O. Box 536475, Orlando, FL32853-6475.