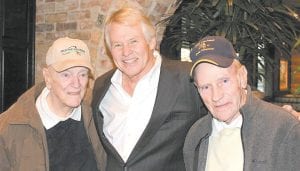 When former Jenkins High and University of Kentucky football standout Phil Greer opened a new Cheddar’s Restaurant in Bristol, Va., in late January he was greeted by his former Jenkins Little League football coaches, Joe Bukovich and Wayne Collins. Greer, the CEO of Lexington-based Greer Companies and a native of Letcher County, said the two men, who live in Jenkins, were great inspirations in his life and his career and that he was pleased they drove all the way to Bristol to share in his success. Greer is a 1969 UK graduate.