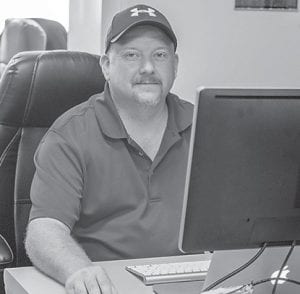 Garland Couch used to work in the coal industry. With nearly two decades of experience under his belt, the Whitesburg native had worked in many of the positions the industry has to offer.

“I started out with a laboratory doing coal, water, and soil analysis,” Couch says. “Then I got an opportunity with Arch Coal and went to a warehouse tech job there. After about four years, I got into maintenance planning, asset management, workforce efficiency, those types of things.”

These days, Couch spends his time planning and managing a different sort of work. Today, the former coal-industry worker is a junior coder for Bit Source, a new web and software development firm in Pikeville. He’s helping create websites and the very kinds of apps and games he loved playing during his lunch breaks at Arch Coal.

But rewind to less than two years ago — when he worked for the nation’s second largest coal producer — and Couch wasn’t imagining a day when computer code would be his stock-in-trade. At the time, he felt his forward trajectory at Arch Coal was a wonderful thing.

That was until mid-2014 when, in the midst of the ongoing decline in eastern Kentucky coal mining, he became one of roughly 8,000 coal industry employees to find themselves unemployed since 2012.

“I was out of work for three months,” he says, noting the hurt and frustration from that time are still fresh to him.

Couch searched everywhere in and out of the area for new employment. It was while traveling one day during his search that he says he turned on the radio and heard the commercial that would end up turning his life around.

“I was driving down the road and it came on and said . . . here’s an available job where you might be able to stay at home,” he says.

That job opportunity was with Bit Source, and the company was offering paid training for 22 weeks for 10 new employees in computer programming and coding. At the end of the training period, full-time jobs would be waiting for them.

Bit Source was founded in 2014 by Pikeville businessmen Charles “Rusty” Justice and M. Lynn Parrish, who developed the idea after attending a SOAR (Shaping Our Appalachian Region) sponsored factfinding trip to Awesome Inc., a computer-coding incubator in Lexington.

Justice and Parrish founded Bit Source as an effort to introduce a new tech sector to eastern Kentucky; one that features coding and programming jobs that can ultimately pay wages that approach, and sometimes match and exceed, some coal-industry wages.

EKCEP used National Emergency Grant funds from the U.S. Department of Labor through its Hiring Our Miners Everyday (H.O.M.E.) initiative — all under the auspices of the Workforce Innovation and Opportunity Act (WIOA) — to cover the interns’ training wages for their participation in Bit Source’s immersive, 22-week, in-house training program.

Though anyone interested was invited to apply for the positions, Bit Source officials were looking especially for displaced coal industry workers, just like Couch. And the competition was stiff with about 900 people applying for only 10 positions.

“I had no idea what the job was or how it was going to be taught or anything like that,” Couch recalls. “I had never even seen code.”

Coding is the shorthand term for computer coding, a system of writing commands for computers and computer programs. Applying for a coding job with only casual tech experience was terrifying, Couch admits.

“There was a little stress,” he says. “Can I do this? Is this something I can do?”

Weeks went by after Couch applied with Bit Source. While waiting for a reply, he was hearing back from other employers who were making him job offers. But one such offer from a Louisville company is the most memorable, Couch says.

“When the call came from Bit Source, me and my family were in our car, heading to Louisville. We were going there to accept or reject a job offer that I had gotten,” he says. “We were literally leaving.”

Leaving the region was simply not something Couch and his family had in mind for their future.

“This is where I grew up, it’s where my wife grew up,” he says. “We’ve got a 10-year-old daughter, and we wanted her to have the opportunity to grow up in the same region and be exposed to the same people, the same philosophies, and the same rural-area values that we had.”