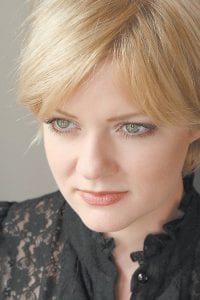 Former Drive-By Truckers bassist and Muscle Shoals, Alabamanative Shonna Tucker and the band she now performs with, Eye Candy, will return to Whitesburg Friday night (June 13) for a concert appearance at Summit City. The band, which also features former Drive-By Trucker member John Neff, is winding up a spring tour in support of their well-received debut album, A Tale All, which was released last October. Admission is $15. Call 633-2715 for information.