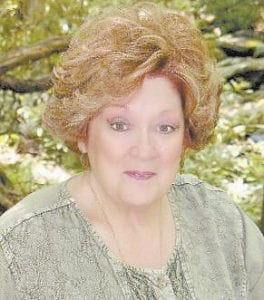 Lulu Roman as she appears today.

There’s more to LuLu Roman than meets the eye.

And less — she’s lost 200 pounds since her days as a comedian on the popular, long-running country-music television comedy show “Hee-Haw.”

Roman is a singer, songwriter, author, comedian, actress, artist — she paints flower blossoms, among other things — and a tireless worker for Christ.

She led a capacity crowd in Sidney Baptist Church’s 350-seat auditorium through her life, which began May 6, 1947, in a home for unwed mothers near Dallas. She was quickly placed in an orphanage.

Roman said that, from the beginning, “I had a thyroid problem that made me just a little bit rounder than anyone else. At any given time, there were 800 to 1,200 kids in the orphanage. It was huge.”

As an overweight girl, she was the object of teasing and feels she developed her particular style of humor as a defense.

Roman said families did not want to adopt her because of her size. And, although she was made to go to church every time the orphanage church door was open, she did not get the gospel message. 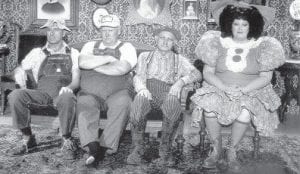 The message she felt she was getting from the world was, “Fat was stupid; fat is lazy; fat is unlovable … That’s what the devil used against me.”

When she left the orphanage at 18, she said she threw all that church teaching away, determined to live life the way she wanted to.

She said that it took her eight painful years to learn that was not true, that all along God had chosen her as a servant.

“I made bad choices — men, money, sex, drugs. … I got high enough to get away from the ugliness.”

Leaving the orphanage was one turning point in her life. Another was landing the role on “Hee- Haw” as a result of entertaining club patrons with her comedy routines.

“In a Dallas nightclub, I met (country music star) Buck Owens. He said, ‘You are the funniest thing I’ve ever seen.’ I was not into country music. I was a flower child (hippie).”

Unbeknownst to her, a TV producer was planning a countrymusic show based on the successful “Rowan and Martin’s Laugh- In.” The producer thought a corny, country music-comedy show modeled after “Laugh-In” could make a lot of money.

Owens was chosen to co-host the new show along with musician Roy Clark.

For the show, the producer told Owens, he wanted pretty girls, male and female country musicians, singers and comedians, including one fat man and one fat woman.

“And Buck said, I’ve got your woman,”‘ Roman said, laughing. “They dropped me into a bunch of (country music) legends. I didn’t know who these people were.”

At about that time, as a young, unmarried hippie woman, into “free love,” she became pregnant. “Free love will cost you,” Roman said.

She had also increased her drug use.

“I’d gone past popping pills and smoking dope. I had needle marks in my arms. No one told me not to do drugs when I was pregnant. I was the fat girl and nobody cared,” she said.

When her son, Damon Eric, was born, doctors did not think the baby would be OK. His outlook was bleak, and Roman prayed to God, trying to strike a bargain and beginning her prayer with something like, “Yo, dude.”

“Be very careful what you say to him,” Roman said. “He hears you.”

Damon Eric, now 36, pulled through and became healthy and he and his brother, Justin, 32, are now both “wonderful young men who love Jesus,” Roman said.

After Damon Eric’s birth, Roman was busted twice for drugs. “They told me they were going to put me under the jail,” she said. She was kicked off “Hee-Haw” but was later allowed to rejoin the cast.

But the biggest turning point was yet to come.

A woman she had grown up with in the orphanage asked her to go to church. At first, Roman didn’t want to go, but then started attending the church. On April 11, 1973, she said, “Jesus gave his heart to me.”

And, she gave hers to him.

“He showed me the truth and the way,” she said. “He’s my hiding place.”

“God did not throw that little girl away in the orphanage — he chose her. I was not born just to be on ‘Hee-Haw.’ ‘Hee-Haw’ was just a vehicle. I was chosen to be a servant of God. And I will serve him as long as I live.”

“Hee-Haw” went on to become one of the longest-running shows ever, with Roman on the show until it ended production in the early 1990s.