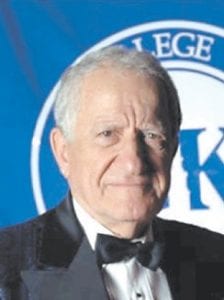 As the leader of the federal agency that oversees mine safety in the United States from 1983- 1987, Zegeer gives the reader insight into the operations of MSHA.

Zegeer, formerly of Jenkins, had a long career in the coal industry in Kentucky with Consolidation Coal Company and Beth-Elkhorn Corporation ( owned by Bethlehem Steel). After retiring to Lexington and serving as a mining consultant for several years, he accepted the position as Assistant Secretary for the U.S. Department of Labor, Mine Safety and Health Administration in 1983 where he remained until 1987.

Zegeer retired again to Lexington, working as a consulting engineer for the remainder of his active career. He had developed a reputation as an expert on mine explosions and their prevention. One of his retirement goals had been to write a book that chronicled his time as head of MSHA, including a history of the agency.

When Zegeer’s health began to decline, he retained Shannon Lamkin to pull his notes together. Zegeer died on December 10, 2012, but had read and approved the final chapter of the book the week before he passed.

The book is part memoir, part history, and part commentary. The book is dedicated to the miners in the U.S. who have made this country what it is today.

All proceeds after expenses of this book will go to benefit the David A. Zegeer Mine Health & Safety Scholarship at the University of Kentucky, Department of Mining Engineering.

To order copies of INSIDE MSHA: The Formative Years of the Mine Safety and Health Administration, visit www.davezegeer.com.