Former neighbors come for a visit 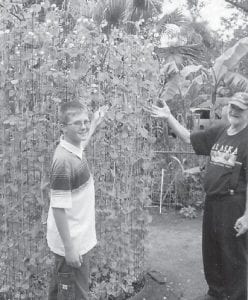 KENTUCKY PEAS — Carl Wyatt of Fort Pierce, Fla., pictured with his grandson Sean Phillips, grew these Kentucky Pea plants to more than seven feet tall in his winter garden. He was given the seeds by his sister-in-law, Donna Maggard of Whitesburg. He was married to the late Lucille Maggard Wyatt, daughter of the late Sidney and Ruby Maggard. The pea seeds are an old time salad peas variety, which were from Ruby Maggard’s garden. Saving seeds from each growing season and passing them along from generation to generation is a mountain tradition.

Hello everyone. I hope you are all doing well.

Can you believe we are into September? The seasons seem to fly by. But I am determined to enjoy all of them.

Last week was a good week. Adrian and Donna Maggard, who were my neighbors many years ago, came out for a visit the other day. I took them on a tour to the house they lived in when their boys were small, over to my trailer, and to my goat lot to see Annabel and the other goats, Dolly, Molly, Betty and Bobby.

They thought they were cute. Donna took pictures of them. They met my dogs, Speck and Buddy, and then we went up and around the hill. I probably wore them out.

I wanted them to see all the changes up here. I sure did enjoy their visit and I hope they will come back. I promise I won’t walk you to death next time.

I was so sorry to hear of the death of one of The Master’s Harmony group. He will surely be missed. John Tate Caudill was so young, only 30 years old.

Dorothy Tackett called to tell me she had a visit from an old Marlowe friend who didn’t want her name mentioned. I knew her and wished I could have seen her. She gets The Eagle.
A big hello to her.

I went to the Ermine Center three days last week, and met two nice ladies that I had never met. New ones keep showing up.

One of the ladies was Martha Harris of Jenkins. Her husband, Ed Harris, is in Letcher Manor Nursing Home. I was very impressed with her, and I even visited him while I was up there visiting Earl and Juanita Profitt. He is improving.

I have a lot of friends up there, so it takes awhile to see all of them.

Joyce Vermillion was at the Center. She was starting art classes at Cowan Community Center.

Linda Pennington Hall called me and commented on the baby picture I put in last week.

I also talked to Mary Katherine Wilson, and she was asking about Anna Lou Combs. She lived next to Della Mae and Morris Maggard. They are kinfolk.

I wrote my news real early because of taking a trip to Owensboro to visit my son, Rob Hatton. It’s been so long since I’ve been there, but he has been good to come see me. It’s 350 miles and it’s hard for me to get there. No way would I drive there. My son Astor and his wife went with me.

I made a mistake last week and said I thought Cram Creek Church was starting this week, but it wasn’t. I’ll find out and put it in when it’s time. So don’t go up there this week.

Hello Emma Lou Engle. Yes, I am behaving myself and having a great summer. I work outside a lot, trimming bushes and pulling weeds out of my flowers.

I’m not like some of you lucky people who have had early mustard, and don’t have a late patch coming on. We have never had any luck with any kind of greens.

Clyde always tried and they were just long stems. You make me so hungry telling me about them, and your soup beans and cornbread. I wish you lived close by; I would help you eat them.

I was real disappointed you didn’t make it in May. The way time flies, it will be next May before we know it. I hope the winter won’t be too bad.

Lots of folks from our church will be going out of town or having family come to visit over the Labor Day holiday. I hope they all make safe trips. There have been so many accidents lately.

I see I’m rattling on, so that means it’s time to stop.

Ermine Center has a lot of things planned. I’m hoping to get in some of them.

May God bless you, try to be in church somewhere this week.