Former owner donates $2,000 to each miner from Blackjewel 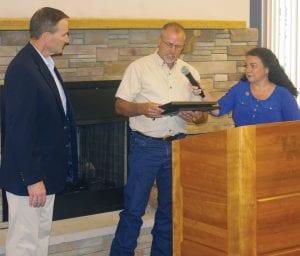 Blackjewel miners continued to block the railroad tracks near Cumberland this week as the community and government advocates moved to provide help for those who are still owed back wages from the bankrupt company.

The miners allowed CSX to remove its locomotive from the Blackjewel tipple, but the coal stayed in gondolas at the site. The company had attempted to move the coal out of the county, but miners learned of the effort and blocked the railroad tracks.

On Monday, the Richard and Leslie Gilliam Foundation announced grants of more than $1 million to miners across the region affected by the Blackjewel bankruptcy, and on the same day the U.S. Department of Labor asked the U.S. Bankruptcy Court to prevent any coal owned by Blackjewel being moved until miners are paid.

Ross Kegan, former vice president for operations of Black Mountain Resources, delivered checks from the Gilliam Foundation to Letcher County and Harlan County and to the Southwest Virginia Workforce Development Board for the idled miners. Kegan, who worked for Richard Gilliam, former owner of Black Mountain Resources, for 11 years, said when Gilliam learned of the sudden closure and that the miners’ paychecks had bounced, he called him.

“He asked me to do a little research on what he could do for these miners,” Kegan said.

Letcher County had already started a relief fund, and 138 miners had already been added to a database of employees needing help. Even more are affected in Harlan County. Gilliam settled on giving $2,000 each to those families affected.

“Because of the work your leaders here in Letcher County have done, Richard wants to help,” Kegan said.

Kegan said without what grows in the ground or is extracted from the ground, no buildings, cars, or any other technology would exist.

Judge Adams gave Kegan a plaque for Gilliam thanking him for his help.

“People have had a lot to say about coal operators, but there are good actors and there are bad actors,” Adams said.

State Representative Angie Hatton, the daughter of a coal miner turned coal operator, also thanked Gilliam, saying that “a coal miner’s daughter couldn’t be prouder than I have been this week” as she watched the community come together to help the Blackjewel miners.

“It’s wonderful to see that there are coal operators who are good people and who know that the most important thing to ever come out of a coal mine is a coal miner,” Hatton said.

Also on Monday, the U.S. Department of Labor Office of the Solicitor filed a motion in U.S. Bankruptcy Court saying that coal mined by Blackjewel prior to its closing is a “hot good” under the Fair Labor Standards Act and that the court should prevent the sale of coal until the wages are paid.

Congressman Harold “Hal” Rogers said in statement that “I am eager for some peace of mind for our miners and their families, and it is reassuring that DOL attorneys agree that the coal they mined should not be sold until the coal miners are paid.”

“I have remained in constant contact with DOL officials to ensure all resources are being expended for our laid-off coal miners, including support for unemployment benefits and displaced worker grants,” said Congressman Rogers. “I continue to stand in awe of the generosity of neighbors, nonprofit organizations and people from across the country who have donated goods and financial support to these families in need. Once again, the people of southeastern Kentucky are proving to be resilient through difficult times and I will continue to stand shoulder to shoulder with them along the way.”

Miners received their last paychecks on June 28 for the pay period ending June 14, but those checks were returned due to insufficient funds.

Terry Cornett of Linefork, an electrician at Blackjewel’s Cloverlick mine, said he had no idea the mine was closing until he went to work on July 1. He said he had worked the night before as usual, and nothing was said to indicate he might not have a job the next night.

“I worked that shift, came out the next night, and when I got to the mines, there was only one car in the parking lot and that was a security guard,” Cornett said.

The company had already scheduled four days off for the July 4 holiday, so Cornett said he left on vacation.

“We were at the lake,” he said, when a friend told him he had better check his bank account. “I called the bank on Friday and they told me my check had bounced.”

Cornett said he has begun receiving unemployment now, so he now has some income coming in. He said those who had not worked long enough to draw unemployment have no income.