He’s the new offensive coordinator at Division III Franklin College, which is located just south of Indianapolis. He had been head coach at Freemont Ross High School in Ohio after previously coaching wide receivers at Tiffin College in Ohio.

Franklin runs a spread offense that Yeast likes. Last year Franklin threw for over 4,000 yards and averaged 531 yards and 42 points per game. The team went 8-3 and made the NCAA playoffs.

“I am not a my way or highway kind of guy. I am not the head coach. They have some skilled players and a quarterback who can really throw,” Yeast said. “I want to learn and figure out what they did and add my spin here and there and see if we can make it work even better. But what they do is really good.”

Yeast likely will be back in Kentucky recruiting, especially in the Louisville area, and could also use contacts he has in the Cincinnati and Dayton areas. 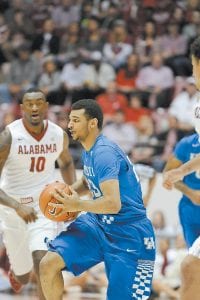 Former high school teammates say they have not been surprised by Jamal Murray’s success this year and expect him to do even more. (Photo by Vicky Graff )

His son, Russ, is now a junior and has verbally committed to play at the University of Kentucky like his father did. Craig Yeast is not yet sure where his son will play his high school senior season — “but it obviously will be around Indianapolis somewhere,” Craig Yeast said.

“I think what they did offensively at Cincinnati will be really good for the UK program,” Craig Yeast said. “I think Russ is excited. He had an offer from Cincinnati. Those are guys we know. We have not spent a lot of time with them. I worked at a camp there. We have talked. I think it will be great for Kentucky and really good for coach Stoops. It gives him an opportunity to have somebody he trusts calling the offense and somebody he knows can get the job done. It’s important to have somebody you trust running the offense. 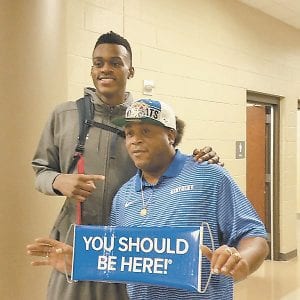 Russ Yeast could play receiver or cornerback at UK. If he plays receiver, he will play for a new receivers coach — Chad Scott. The past three years he has coached running backs at UK and before that he did the same at Troy and Texas Tech under Neal Brown.

“Chad is a heck of coach and a good recruiter and an even better person,” Craig Yeast said. “He is well respected by players. There will be a learning curve for him, but knowing what I know about him he will work his tail off and do a great job.”

Two of Jamal Murray’s former Canadian high school teammates say not to worry about how he’ll keep playing this season at Kentucky.

“He will get better as time goes. He will pick it up and he’s already doing great,” said 7-footer Thon Maker of Athlete Institute in Canada, who was a one-time UK recruit. “It’s the same Jamal we played with last year. He’s just getting used to the level of play and style of play of his teammates and the college level but eventually you will see the true Jamal. You’ve not seen that yet.”

Matur Maker’s, the 6-10 younger brother of Thon Maker, recently talked to Murray’s father and has watched his games.

“He is looking good out there. He has done pretty good. I thought his defense might be a little bit of a struggle, but he has stepped it up. He is aggressive and that’s good for him,” Matur Maker said during last week’s McCracken County Mustang Madness. “We were really intense at practice last year and he liked that. I would go at him, he would go at me. He would go at Thon and Thon at him. It was aggressive. That helped us. Off the court, he is family and we just enjoy ourself.

Thon Maker says Murray is a “cool guy” that liked to make jokes and hang out with teammates.

“But before games he gets in his own zone, but off the court he is just a great guy to hang with,” Thon Maker said.

The brothers said they were not surprised when Murray reclassified so he could play in college this year rather than returning to their team.

“He told me he was thinking about it. I kind of knew. I didn’t know where he would end up, but I knew he would reclassify because we talked. But him deciding on Kentucky was a great move and will be good for his future,” Thon Maker said.

“When we got there they were saying he might reclassify. He went on in the season and things got good, so he did it and it was obviously the right choice for him,” Matur Maker said.

New Zealand’s Tai Wynyard looks like he’ll have a chance to earn playing time for John Calipari based on the struggle of UK’s interior players way too often this season.

“He does a lot of things. We were very surprised by his talent,” UK freshman Jamal Murray said. “I played with him at (Nike) Hoop Summit, so did Skal (Labissiere). He comes in and gives us some girth and some toughness. He does the plays that we need to have. He’s just got to learn all the plays, all the sets and he’ll be fine.”

Junior Marcus Lee says Wynyard will eventually “be ready to add something” to the team once he gets fully acclimated to the offense, defense and conditioning.

“Once he gets ready and situated, I think he will contribute a lot,” Lee said.

Kentucky assistant coach Kenny Payne said conditioning has been an issue for Wynyard since he joined the team in late December.

“We’re trying to get him in the type of shape where he can go out and play whatever minutes that we give him,” Payne said. “He’s really strong and a big kid. He sets great screens and rebounds. We’ve just got to get him in shape.”

“He’s got a great mentality about it, but if he ran up and down the court three or four times he’d probably be exhausted,” the UK coach said. “We have some other guys that look the same way and have been here awhile. He’s a pretty bright kid. He’s doing some good stuff.”

One of the biggest puzzles this season has been what has happened to freshman Isaiah Briscoe’s free throw shooting? He has gone from a 70 percent free throw shooter in high school to a player who has no confidence at the foul line and is shooting only 34 percent (18 of 53) at the foul line. His 3-point shooting has also been abysmal at 18.2 percent (4 of 22). Yet he’s still averaging 10.6 points, 5.5 rebounds and 2.6 assists per game along with providing consistent defense.

Calipari said it is more mental than anything with Briscoe’s shooting.

“When you’re playing in high school and whatever I do is fine, then you come here and you’re on this stage, kinda gets you thinking a little bit. He has to work his way through it,” Calipari said. “I talk about mental toughness, things don’t go right. You’ve gotta be mentally tough enough to bounce through that and change. ‘OK, what I’m doing isn’t right. I’ve gotta take this up a notch,’ that’s mental toughness.

“You miss a shot, it can’t lead to three more misses because you’re still thinking about the first. There’s no mental toughness there. Another team makes a run on you, then you say ‘OK, now it’s our turn to make a run,’ if not, it starts seeping in your mind that you may lose. The mental toughness is all new to these guys.”

Jarred Vanderbilt, one of the nation’s top-ranked juniors, seems to have a high interest in Kentucky. He was in Paducah last week playing in the McCracken County Mustang Madness and will be in Pulaski County in February for two more games. The 6-9 Vanderbilt has 3-point range and had a triple-double in his first game in Paducah.

“I am real high on Calipari,” Robert Vanderbilt, a former Prairie View A&M assistant coach and Jarred’s father, said. “He is an all-around good guy. Our first conversation last year he asked what I wanted for Jarred and I said I want what is best for him. I was impressed with the way he handled himself. We are very high on Coach Cal. He’s a good coach, good all-around person. His program is not about him, but his kids. We have a lot of respect for him.”

Calipari obviously feels the same about a 6-9 player who can handle the ball, shoot the 3-pointer, rebound, make accurate passes or do about anything else.

“He is an old school Magic Johnson. He can play any position on the court,” his father said. “He handles the ball so well for a 6-9 kid. He’s just a rare player.”

His coach is former Louisville and NBA star Rodney McCray.

“His understanding of the game and being able to play the game, he already had that before I saw him. It’s all about winning. If you a preseason player of year candidate, I still did what the team needed me to do and did live up to being team player,” Mc- Cray said.

“Just understand and play the right way. You are not going to get 30 every night. Defenses are going to key on him. So just make the play. He is a triple double threat every night. As far as him playing the game, he knew that before I met him.

“I might sound biased but he has the whole package. His ball handling is off the chart. If he shows he can consistently knock down that 15-footer, then the sky is the limit for him. He can get to any place on the court. He rebounds, he defends, he passes. Once he gets stronger and in college puts weight on, I expect great things from him.”