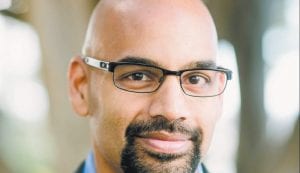 Let it be said that members of the 1993 graduating class of Whitesburg High School knew what they were doing when they picked Naveen Rao as their fellow student who was “most likely to succeed.”

Although it didn’t take very long for the predictions of that ’93 class to come true, neuroscientist Rao turned his classmates’ crystal ball into one huge diamond recently when the hi-tech firm he helped start was sold to the computer chipmaker Intel Corporation for $408 million.

Rao, a son of Dr. Chalapathi Rao, Letcher County’s best-known pediatrician for 35 years before he retired in 2013, co-founded San Diegobased Nervana Systems in 2014 and serves as the company’s CEO.

Intel is apparently most interested in what Fortune calls a “specialized chip for deep learning” that is much faster than other chips of its kind.

“The world is awash in big data,” Nervana board member Steve Jurvetson explained to Fortune. “Just think about satellite imagery that allows you to count every tree or every car in a parking lot and imagine that every day someone had to count every car or tree and thus more data than is possible for a human to handle. And this is where deep learning comes in.”

Rao, 43, was a young child when his parents moved to Whitesburg in 1978 his father started practicing medicine at Appalachian Regional Healthcare’s old Daniel Boone Clinic. The younger Rao was a popular student at West Whitesburg Elementary School, Whitesburg Middle School, and Whitesburg High School, where he was one of five valedictorians in his senior class.

While artificial intelligence “was once thought of as a sci-fi concept, the technology behind it has come to propel a slew of innovations by hardware and software companies that both attract attention – like self-driving cars – and ones that often go unnoticed, like product recommendations on Amazon,” the Christian Science Monitor explained while reporting on the sale of Rao’s firm to Intel. “ … Deep learning expands socalled neural networks, which are modeled on the human brain, to a much larger scale, allowing a computer to perform tasks such as recognizing an image of a cat without necessarily having prior knowledge of what a cat looked like.”

In his personal biography, Naveen Rao writes, “I co-founded Nervana with the goal of changing the way we think about computation. In the previous phase of computation, we built machines that crunch numbers. In the next phase of computation, we’ll need machines that crunch data — the ability to peer into large data sets and find useful insight. The deep learning revolution has given us the framework to do this. Now we need the tools to make this easy to use, deploy, and scale. This is Nervana.”

After retiring from his pediatrics practice here, Dr. Rao and his wife moved to California to be closer to Naveen and Naveen’s brother Dr. Srini Rao, a 1984 WHS graduate who was also a class valedictorian.

In 2015, Naveen Rao discussed his new company and its work in artificial intelligence with an interviewer for the online magazine OpenMarkets. “Medical diagnostic space is something that I personally would love to see – my whole family are MD’s,” Rao said. “I would really love to see some of these problems that can become standardized instead of having a doctor somewhere who is the best at reading an X-ray, and if you don’t get in front of his eyes you don’t get the best. We should be able to standardize that and build it into an algorithm. You’re going to have criteria for when a cell looks cancerous or not; we can standardize that and code it to an algorithm so it’s definitive, and not an opinion.”