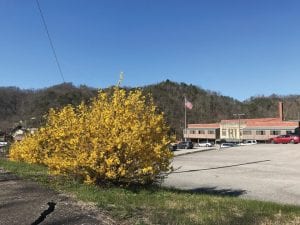 Forsythia is blooming this week on School Hill in Whitesburg, on the old school property now owned and operated by Mountain Comprehensive Health Corporation. (Eagle Photo)

A better man than me would have written down the daily high and low temperatures for the month of March but I didn’t do it, nor have I been able to track down the information. If I was truly persistent I suppose I could have contacted the local television weather stations and ascertained precise data but that seems like a lot of work to put into one little tidbit of newspaper column fodder, so I’m just going to wing it and go with gut feel.

If the first week of March was not the coldest week of the year to date, then it darn sure felt like it to the cat and me. Neither of us spent much time outdoors and Fancy Pants didn’t even make her daily trips to the mailbox with me. March may have come in like a lion but the lion on Charlie Brown Road sure stayed holed up and under the covers for nearly a week. Fortunately, the forecast portends that a lamb is waiting in the wings for the last week of the month.

Unfortunately, however, my eastern bluebirds have not returned from the early spring break from which they departed during that first miserable week in March.

Throughout the entire fall and winter months, from November through February, we have had five bluebirds all sharing the same nighttime nesting box and, almost daily, perching on whatever utility line, fence line, tree or shrub they may find handy throughout the yard and garden. They seemed to be a rather cheerful and well satisfied lot, as bluebirds tend to be, and I have had no inkling they suffered any sense of discontent.

I had noticed their absence for several days during that first week of March because they are, ordinarily, so conspicuous in the front yard that it’s practically impossible to keep from noticing them, however short the amounts of outdoor time I may have found myself outside.

In the meantime, March 24 has come and gone at this writing and I haven’t seen hide nor hair, nor even feather of a bluebird, anywhere close to Paint Lick since right at the end of February. Ordinarily, at least one pair would have been busily involved with all the housekeeping necessary to spruce up a new nest.

In fact, since some of my neighbors have taken to calling me a bluebird slumlord, I have made some carpentry efforts on the old box that still looks much like a hillbilly toilet. Hey, the birds have seemed to love it for the last 20 years and I prefer to call it “outhouse chic.”

Then, about three weeks ago while the blues were still on hiatus, I managed to acquire a brand new “brought on” Alpine style birdhouse of bluebird proportions that is supposed to look like a miniature version of a typical Swiss cottage, complete with a steep, hammered-tin roof.

My brother, Andy, helped get it mounted on a nearby fence post. I was thinking that we might have two nesting pairs instead of just the one brood we’ve grown accustomed to having around for decades. If that didn’t work out, I figured a pair of tree swallows might lay claim to the new dwelling or maybe take up residence in the old box if the blues decided to upscale. In any event, the neighborhood was commencing to notice considerable improvement now that some fancier digs had been constructed.

The forsythia has bloomed and, normally, the bluebirds are dancing in it. I can’t think of anything that spells spring more profoundly than bluebirds and forsythia. It simply does not seem right to see one without the other.

Maybe they will show back up by the time you read this but time sure seems to be wasting. We’ll keep you posted.