Forty years of marriage have gone by quickly 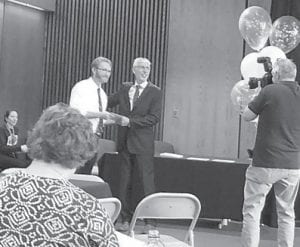 If anyone had told me 40 years of marriage would have gone by as fast as it has for me and my husband Jimmy Yonts, I wouldn’t have believed it. Forty whole years have come and gone and it seems like it was yesterday.

We married in 1979 on Memorial Day weekend for two reasons. First, I was off work for Memorial Day and my sister, Lucille Tacket Graves, and her husband John were home for a few days. He was in the service and we never knew when they would be home again. So, we decided a week and a half before the wedding that was when it needed to be.

We never realized how much work this would mean for my sister Charlene. She put it all together and we only had to come up with my dress and his suit. He took care of his suit and Charlene and Rick took me to Kingsport and we found a dress that I loved and it was on sale for $20.

Back then you had to file for a marriage license at the courthouse and you also had to get a blood test from a doctor. There was a few days’ wait until all these results came back. So, the Saturday morning of our wedding day, we met at the Letcher County Courthouse to pick up the marriage license. We were sitting in my Dodge Dart waiting for them to open and he reached up to touch my ear and said, “You’ve got a tick behind your ear!” Sure enough there was one there, and every time he tells this tale that tick gets bigger and bigger. The last time he told it, the tick was about the size of a dime and so full of blood. He said it was as big as the ones you find on a dog that are ready to fall off. 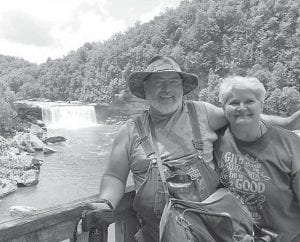 The preacher that married us was Larry Jones, the son of preacher Ralph Jones. Our bridal song was from an LP album being played and manned by my good friend, Ruby Combs, on a phonograph player in the back bedroom of Mom and Dad’s home of Cane Hollow.

Let me back up a little bit. The wedding was supposed to be in Mom and Dad’s front yard and the reception inside the house. The chairs and tables were borrowed from Millstone Missionary Baptist Church. The chairs were all set up in the front yard and it looked so pretty, right before the cold rain started. So, it had to all be moved to the inside and all the chairs had to be moved inside, which actually left very little room for the wedding party to stand. Of course, the wedding party only consisted of me, my husband Jimmy Yonts, my sister Delores who was my bridesmaid, and his best man, who was his best friend and second cousin, Kenneth Holbrook. But, we also had to have room for Dad to bring me in from the back bedroom and stand with me to give me away and of course the preacher had to stand with us, too. 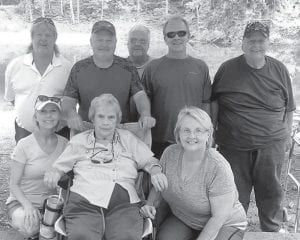 Imogene Sexton is pictured with her seven children, Stanley, Roger, Charles Ralph, Lovell Jr., Robert Dennis, Patricia Lewis, and Sandra Wilson. Brandon Absher and his new wife Rachel live in Buffalo, N.Y., where he is a professor with a doctorate at D’Youville College in Buffalo. His wife is a professor with a doctorate at another college. He is a son of David and Delbretta Absher of Georgetown. The family lived in Jenkins until David Absher went to work for Toyota. Brandon Absher, the oldest of three children, was five years old when they moved and David and Delbretta Absher raised their three children in Georgetown. Delbert and Henrietta Anderson of McRoberts and Berta Absher of Georgetown are the children’s grandparents.

Ruby started the music and Daddy brought me down the hall and into the living room and as we came to our spots Charlene was yelling, “No, no, the groom isn’t in here yet!” So Dad turned me around and as we were leaving the living room he turned back and said, “That was just a practice.”

I said all that to say this, the whole wedding probably cost about $200 if it cost that and our marriage has lasted for 40 years. God has been in our marriage from the beginning and that has made all the difference. If you don’t put God first you have no foundation to build on.

There are so many things the families in our communities do on Memorial Day weekend. But, Memorial Day itself was a day to set aside to remember all those that lost their lives defending our country. I know we all use it to decorate our loved ones’ graves, but originally it wasn’t meant for that. This is a memory my nephew, Philip Marshal Graves, posted today on his Facebook page and he gave me permission to post it here in the paper.

“I can’t put into words how I feel today; as I sit here in the comfort of my home looking out the window a black POW/MIA is flapping in the wind.

“Allow me to tell you a story, in lieu of telling you how I feel. In 2008 On my first deployment to Afghanistan I was given a 4 day (on Christmas Eve) pass halfway through and got the opportunity to go to Camp Arifjan in Kuwait for some R&R. From Kabul I took a convoy to Kabul Natl Airport, from there I could have taken another convoy (about a 2 hour ride) or caught a 30 min. ride on C-130 over the Hindu Kush mountains to Bagram Air Base (I opted for the C-130).

“I spent all day at Bagram waiting for a C-17. When it finally landed and all the cargo was unloaded they told everyone in the passenger terminal that we could start loading. There was probably 100 or so people waiting. Some people were heading home, some were passing through, others like me going on R&R. Everyone was tired, everyone was exhausted and eager to get on board.

“Once we got off the jet we were all standing around, then someone said “everyone, make 2 lines from the loading area back to the passenger terminal.” It took a minute to realize what was going on since we were all tired but when I saw the k-loader’s cargo it hit me like a ton of bricks. My legs turned to jelly and my stomach felt like it was in my throat.

“As the 4 flag draped caskets passed by me, all I could do was salute, and think about the families of those 4 men who would be burying their sons, brothers, husbands, fathers.

“When we got back on the plane, I spent the next few hours staring at the American flag draped coffin right at my feet. It was only a couple hours or so of flying but it was the longest flight of my life. Nobody said a word…

“So many people will never understand the cost of freedom. The price of freedom is paid by those who have given their lives to support and defend the constitution of the United States.

“Greater love hath no man than this, that a man lay down his life for his friends.” John 15:13

Please remember to pray for all our service people, deployed or not. Also, remember all those who have lost loved ones. Jack Pinyerd’s family surely need our prayers. Jack was a member of Letcher Independent Baptist Church and he passed away May 23. We will miss him so very much. Imogene Sexton and her family also need our prayers. Elaine Smith, Laney Webb, Doug Wright, Estel Taylor, Linda Hall, Rick Adams, Scarlett Coots, Greta Howard, and so many in our community are desperate for prayers.

Our pastor, Bill Jones, and his wife Sandy can also use prayers anytime you pray. They are now looking at a court date for January 2020.

Please listen to Oma’s plea and be in church Sunday morning, Sunday evening, and Wednesday evening.