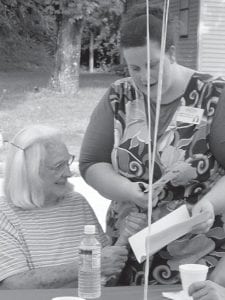 Time is passing so swiftly that it seems as if I finish a column and it is time for another one! Last week was very good for me as I found the time to spend quality time with my family.

Tuesday I had planned to pick up my grandchildren Jessica and Katelyn Nottingham to take them to Miami Whitewater Park for the day at the water park. My daughter Anna Nottingham invited me to ride with her to an Amish village in Adams County, which is about 75 miles away. I was at Anna’s at 8:30 and we set out for the venture.

It had been years since I had been to an Amish store. The wood work is beautiful, however too expensive for me, plus I don’t need anything. Anna bought a loaf of zucchini bread. I must say I can bake better. The bottom was soggy and it was nasty.

Anna told me earlier that she had been wanting peanut butter fudge, so I told her I would get a friend of mine to make her some since I am not that good at it. Well, she wants mine as she said it has a better texture and taste! My six-year-old granddaughter Katelyn said I made peanut butter fudge perfect! 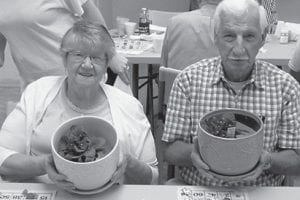 Katelyn has a lot to deal with as she just found out there’s going to be a new baby at their house in a few months! I am going to be a grandmother again! Katie doesn’t really like this idea too well. I asked her if she wanted me to come and get the baby when it got here, and she said she thought that was a very good idea!

Anna has a lot of health problems when she is pregnant and I sort of dread seeing her go through this. Katelyn is six, Jessica eight, and Sarah 12.

After our adventure I brought the girls home with me to spend the night which turned into two nights. Wednesday they spent a few hours with my oldest daughter Kay, who has an in-ground swimming pool. Before the day was over there were four generations in the pool as Kay’s oldest daughter Jennifer came by for a swim with her daughter Samantha and three-yearold T.J. Later Kay’s daughter Jodi came home and joined us in the pool. 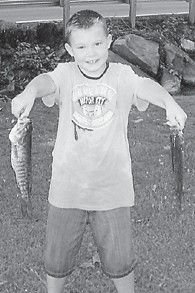 YOUNG ANGLER — Kyler Sexton, 9, of Isom, son of Jackie Sexton and Derenda Combs, caught these beauties in the Kentucky River at Isom. He is the grandson of Jack Wayne, Doris Sexton, and Buford and Tina Combs.

Since I had no bathing suit I ended up putting on a pair of my grandson’s Jamie Gray’s shorts and shirt and got in the water, which was so delightful.

Samantha decided to come home with us to spend the night. After the girls were finished swimming, I picked up a bucket of chicken and the trimmings and headed for Rising Sun, Ind., so the kids could play in the park they like by the river. The girls played so much it was almost 11 p.m. when we got home.

Anna and her husband Scott Nottingham and girls plus a friend of Sarah’s will be spending a week at Disney World in Florida. They are also going to the Kennedy Space Center. This is the first time the girls have been on an airplane.

Friday night I went to my favorite place, the Coon Hunters Club. The music was good and especially when Marvin Davis showed up and played that fiddle. As usual he delighted the crowd with his playing. I wish he would record some of his music.

Clarence and Arlyn Halcomb were planning on going to the Coon Hunter’s Club, but Clarence wasn’t feeling his usual perky self so they didn’t make it.

My sweet friend Willamae Boggs is still not feeling very well. Since this last stay in the hospital Willamae can’t seem to gain much strength. I sure hope she is on the road to full recovery before long. Carl is missing Willamae being able to be her usual active self. I am looking forward to sometime in the near future being able to go back to the mountains to visit Willamae and Carl and going to Hindman with them to listen to music, maybe even dance a time or two.

Gwen Huff Farmer got everything done in her garden then has gone on vacation with her son John Farmer and family. I know she is having a good time.

I haven’t talked to Ann Calihan since I was busy with my grandchildren so I hope everyone is doing alright.

I haven’t seen my little sidekick Bennie Wiederhold so I am going to get him this week. I miss this kid so much.

I hope Larry Roark and his son Timmy can come to this as everyone really enjoyed Larry and Tim playing music and singing.

Frick and Frack, keep this date open and come for a good time. All you Whitakers, I hope to see you also.

I am trying to get my brother Richie and Wanda Hall to come out again. Berma Matthews, mark your calendar for this date.

Hayward and Vivian Day along with Kim, I am looking forward to seeing you. Hayward, don’t let Vivian get her days mixed up.

I wish there was some way that Shirley Wells could come to this event. I am still wishing someday Shirley and I can get together once again since it has been 50 years since we have seen each other.

Clarence Halcomb, this is for you. On a whim, a man decided to get his wife a dozen roses and surprise her after work. The minute he opened the door, his wife took one look at the flowers in his hand and started screaming. “This is the worst day I have ever had! The kids have been terrible. They got in a food fight, the washing machine broke and flooded the basement, I burned dinner, the dog chewed up my best pair of shoes. And now you’ve got the nerve to come home drunk!”

For those of you that may be interested, I had a few more copies of my book ‘The Beauty of A Rose’ printed.

Fridays are busy days for me so I better get this own its way.