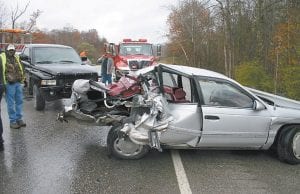 FOUR-VEHICLE MISHAP — Mayking Volunteer fireman Terry Caudill, left, surveys damage to a Mercury Sable passenger car after the vehicle was involved in an accident with a pickup and two larger trucks Friday on U.S. 119 at Mayking. Caudill said the wreck occurred after the black truck seen in the photo swerved to miss the slow-moving Sable. A rollback car hauler and cattle truck were also damaged. Caudill said the fire department’s “Jaws of Life” hydraulic rescue tool was used to help free an elderly man driving the Mercury from the wreckage. Caudill said the man and his wife were taken to the Whitesburg hospital for treatment of injuries which weren’t life-threatening. No one else involved in the accident was injured. (Photo by Chuck Johnson)