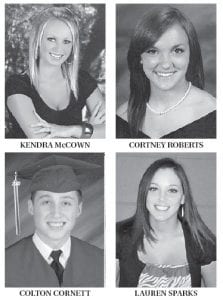 Four students have received 2010 Mountain Heritage Festival Scholarships. They are:

Kendra McCown, daughter of Jimmy and Renata Breeding of Neon. She is a 2010 graduate of Letcher County Central High School and will attend Eastern Kentucky University to become an occupational therapist.

Cortney Roberts, daughter of Joe Roberts of Whitesburg. She is a 2010 graduate of LCCHS and will attend Eastern Kentucky University, majoring in business and marketing.

Colton Cornett, son of Kenny and Virginia Cornett of Blackey, A 2010 graduate of LCCHS, he will attend Alice Lloyd College and plans to become a physician’s assistant.

Lauren Sparks, daughter of Ricky Sparks of Neon. She is a 2010 graduate of Jenkins High School and plans to attend the University of Virginia’s College at Wise and to become a physician.