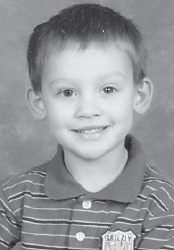 Logan Wyatt Caudill celebrated his fourth birthday December 14. He is the son of Jacquie Banks and Ben Caudill. His grandparents are Edward and Cheryl Banks, and Ute Caudill and the late Larry Caudill. He is the greatgrandson of Martha Smith and the late William Douglas Smith, and Opal Banks and the Everett Banks.