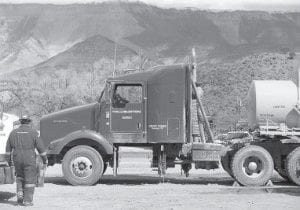 FAMILIAR TRUCK, DIFFERENT LOCATION — A worker heads to a tractor trailer rig owned by Halliburton and used in the drilling of a natural gas well in Rulison, Colo. Similar rigs are used in Letcher County. The push to put a widely used oil and gas drilling process under federal oversight could gain ground with a new administration in place and concerns about the development of huge gas fields in the East. (AP Photo)

Federal lawmakers have introduced a bill that industry warns could prevent development of trillions of cubic feet of natural gas by putting regulation of a key production technique under federal oversight.

It is unclear how much support the proposal to close the “Halliburton loophole” could get in Congress or from the White House, but the oil and natural-gas industry has already geared up for a fight to oppose the provision given its potential impact on the sector.

The legislation would repeal an exemption for the process of “hydraulic fracturing” in the Safe Drinking Water Act that requires disclosure of the chemicals used the production process.

“It’s time to fix an unfortunate chapter in the Bush administration’s energy policy and close the ‘Halliburton loophole’ that has enabled energy companies to pump enormous amounts of toxins, such as benzene and toluene, into the ground that then jeopardize the quality of our drinking water,” U.S. Rep. Hinchey, Member of the House Appropriations Subcommittee on Interior and the Environment and Member of the House Natural Resources Committee, said. “Our legislation says everyone deserves to have safe drinking water by ensuring that hydraulic fracturing is subject to the protections afforded by the Safe Drinking Water Act. The bill also lifts the veil of secrecy currently shrouding this industry practice.”

By forcing hydraulic water, sand and a small percentage of lubricating chemicals into unconventional types of reservoirs called tight sand and shale gas, companies are able to fracture underground rocks and release the trapped gas not traditionally accessible. The 60-year-old practice is regulated solely by state agencies.

Despite its history, “fracking” has gained recent attention as geologists have discovered massive unconventional natural-gas resources in southeastern Kentucky and elsewhere around the U.S., multiplying estimates of the nation’s future production. For example, the Marcellus deposit that lies under Pennsylvania, Virginia, Ohio and New York is estimated to hold more than 500 trillion cubic feet, compared to total conventional natural-gas resource estimates in the U.S. of around 378 trillion cubic feet, according to the U.S. Geological Survey.

Critics of the exemption say federal oversight is needed to protect drinking-water supplies.

“Families, communities, and local governments are upset that the safety of their water has been compromised by a special interest exemption, and we join them in that frustration,” said U.S. Rep. Polis. “It is irresponsible to stand by while innocent people are getting sick because of an industry exemption that Dick Cheney snuck in to our nation’s energy policy. Many new sources of energy, including natural gas, will play an important role in our nation’s transition to cleaner fuels, but we must make sure this isn’t at the expense of public health. The problem is not natural gas or even hydraulic fracturing itself. The problem is that dangerous chemicals are being injected into the earth, polluting our water sources, without any oversight whatsoever.”

Anadarko Petroleum Corp. (APC) spokesman John Christinansen said given state oversight, federal regulation is unnecessary and could at the very least delay new development of unconventional natural gas. “It would result in higher energy costs because it will discourage production,” he said.

Jay Ewing, the manager of completion and construction at Devon Energy’s Barnett field in North Texas, says the ultimate fear of federal regulation “is totally eliminating hydraulic fracturing, and that would eliminate a lot of resources.”

Under Carol Browner, currently President Barack Obama’s energy and climate czar, the EPA in the mid-1990s decided that federal regulation was unnecessary. “There is no evidence that the hydraulic fracturing at issue has resulted in any contamination or endangerment of underground sources of drinking water,” Browner wrote in 1995 as head of the EPA in a letter rejecting federal oversight of a potentially precedent setting case in Alabama.

Some environmentalists and lawmakers are concerned the water supplies needed for the fracking process could over-tap sources used for drinking.

Devon’s Ewing said the three main chemicals used in the process besides water and sand are guar — which is used in chewing gum — soap similar to what’s used in dish detergent, and biocides that kill bacteria in the reservoir. Chemicals such as benzene can be released from the reservoir, but are contained and regulated by the state.

Industry officials also say most of the reservoirs are thousands of feet below drinking water tables, with massive rock barriers preventing any type of contamination.

Compiled from AP and Dow