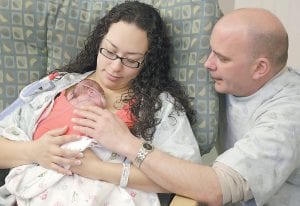 It happens every day to the most vulnerable infants in hospital intensive care units: fragile babies born way too soon are poked, prodded and jabbed as part of medical care meant to help them survive — and it can be heart-wrenching to watch.

Heel sticks for blood tests, inserting IV tubes, adjusting breathing machines — even the gentlest jostling to remove a bandage from translucent skin can cause kittenlike whimpers and tiny arms and legs to suddenly jerk. Sometimes there’s no sound at all — just a dip on the heart rate monitor.

It used to be thought that these infants were too young to feel pain. But even now, experts say, pain relief for newborns and especially preemies is often inadequate, despite evidence that low-tech comforting methods and medication can both be effective.

The American Academy of Pediatrics has new advice — and an admonishment.

Pain in newborns “continues to be inconsistently assessed and inadequately managed,” the academy says. Remedies “are currently underused for routine minor yet painful procedures.”

Preventing and reducing pain, particularly in preemies, is important because of the potential consequences for infant development, the academy said in a policy issued in February.

Research suggests repeated bouts of pain leave infants prone to potential long-term ill effects including changes in nerve structures and brain development, and hypersensitivity to touch and stress — and it’s the smallest and sickest babies who experience the greatest number of painful procedures.

Pain assessment can be a significant challenge in preemies, said newborn specialist Erin Keels, the policy’s lead author and a nurse at Nationwide Children’s Hospital in Columbus,

The new guidance was prompted in part by recent research showing benefits from alternatives to medication, Keels said. These include sugar-dipped pacifiers, tight swaddling and skin-to-skin contact with moms and dads. Newer ways to measure infant pain also are being tested, including measuring brain waves and electrical impulses in the skin.

Pain management during surgery and other major procedures typically requires medication, often opioids including morphine. Shortterm side effects of these drugs may include a slowed heart rate, low blood pressure, and drug dependence. Some small studies have linked use of these drugs in extremely premature babies with slowed weight gain, smaller head size and behavior troubles later in childhood, but research on appropriate doses and potential long-term effects “is woefully lacking,” the academy says.

It urges more research on using these drugs and other medications in infants.

“While we want to manage pain appropriately, we also have to pay attention to not going too far in the other extreme,” said Dr. William MacKendrick, medical director of the infant special care unit at NorthShore Evanston Hospital in Evanston, Illinois. He was not involved in the policy.

U.S. hospitals are required to assess patients’ pain in order to be accredited, and it’s an issue newborn specialists are increasingly paying attention to.

The babies were born more than a month early, in January, weighing less than 3 pounds. They’re enrolled in a study comparing infants’ reactions to two different tiny devices used to detect retinopathy, an eye disease that can cause blindness in very premature babies.

The metal devices prop eyelids open so doctors can look beyond the eyeballs’ surface into the retina. The hospital is trying to find out which of the two devices causes less discomfort, said Debra Skopec, a newborn intensive care nurse and the study’s leader.

Skopec wraps the babies’ legs into a little ball and holds them tightly during the exams, and swaddles them after: “confinement” meant to be comforting. Immediately after the tests, she watches for any changes in vital signs shown on wallmounted monitors.

The twins squeal during the exam, and it all makes their mom, Angelica Juarez, feel pretty helpless.

“I want to cry,” she said during a recent hospital visit, fighting back tears. “And I don’t want my babies to hurt.”