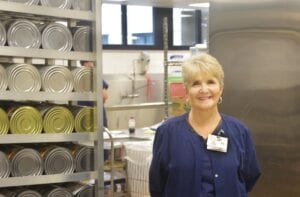 A retirement reception will be held Friday at the Whitesburg hospital for dietician Jackie Fraley, who is leaving ARH after 36 years of service. (Photo by Sam Adams)

Over the past 42 years, Jackie Fraley has developed a thick skin.

She had to. Fraley, who will retire next week, is the dietician in charge of all the food prepared at Whitesburg Appalachian Regional Hospital.

“Everybody talks about hospital food, but one of my goals was to make good food, and I can say we have the best food in the (ARH) system,” Fraley said.

Dr. Ricky Collins said he has eaten in the cafeteria every day for more than 20 years, and “for hospital food, it’s as good as you’re going to get.”

Collins said that patient food is necessarily bland, but that there are some meals in the cafeteria — hot turkey salad, for example — that cause a line to form.

“My favorite is the spaghetti,” Collins said. “I love the spaghetti, the lasagna is real good, and they make homemade pizza and it’s real good. They do real good hamburgers because they use real hamburger.”

Fraley, of Hazard, worked for ARH as a student beginning in 1978, then worked at with Women with Infant Children (WIC) program at Hazard ARH for three years.

Good jobs were hard to come by, especially jobs that would last an entire career. She transferred to Whitesburg 33 years ago and has been there ever since. She said she has never missed because of sickness but was out for a while with a broken leg. She also never missed for weather, even in 1994 when state roads were shut down for five days because of the heavy snow and record low temperatures. That January 16 and 17, Kentucky was hit with up to two feet of snow and temperatures of 20 below zero and colder.

“I was married then,” she said. “My husband brought me in, and I stayed here for a week,” Fraley said.

The cafeteria crew cooked for all the staff that stayed through the road closures the entire week.

Dena Sparkman, community chief executive officer at Whitesburg ARH, said it’s unusual to see an employee who is as loyal as Fraley and has stayed with one company so long.

“I cannot say enough good things. This is someone who’s had a really long career at ARH, making people’s lives better,” she said.

The hospital will hold a reception for Fraley on Friday, Sparkman said.

Over her time at the hospital, Fraley said she seen a lot of change. Patients are sicker – there’s more diabetes, more chronic obstructive pulmonary disease (COPD) — and doctors are busier. They no longer oversee every aspect of a patient’s care, such as a dietary details. Nurses also have more responsibilities.

“It used to be that doctors had it all on themselves, but now, they rely a lot on the ancillary staff,” she said.

Fraley said she’ll continue to live in Hazard when she retires, but beyond that, she doesn’t really know what she’ll do with her time. But, she said, she knows she’s ready to retire.

“A friend of mine who retired three years ago said, ‘You’ll know when it’s time,’ and I know it’s time. I’m ready,” she said.