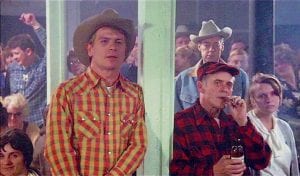 APPEARED IN MOVIE – Frank Majority Jr., in plaid cap and shirt, shared a pole with actor Tommy Lee Jones in this scene taken from the 1979 movie “Coal Miner’s Daughter”, which starred Jones and actress Sissy Spacek, who played Loretta Lynn. Majority died last week at age 89. This photo was provided by Cynthiana resident Chuck Johnson, who developed a friendship with Majority during the filming. Johnson, formerly of Jenkins, also appeared in this scene filmed at the Blackey Community Center, and can be seen at far left. “Those were good times,” Johnson said.

Frank Majority Jr., one of Letcher County’s best-known photographers and an authority on mountain lore, died June 30 after a long illness. He was 89.

Photography was Majority’s hobby, and he will be remembered by many residents here for the large number of photographs he contributed to The Mountain Eagle for a 30-year period beginning in the late-1960’s. Majority’s published photos frequently showed local craftsmen plying their trade or traditional mountain events ranging from sorghum stir-offs to hog killings. An aviation buff, he almost always took photographs of the county from the air whenever he had the chance to fly in a small plane.

Majority will also be remembered by many for his role in Coal Miner’s Daughter, a 1979 film which starred Sissy Spacek and Tommy Lee Jones and was based on the life of country music star Loretta Lynn.

Majority was born in 1918 at Blue Diamond in Perry County, where his father, Francesco Mongiardo, settled after immigrating from Italy and marrying Ollie Fields. The elder Mongiardo later changed the family’s name to the simpler Majority and moved to Letcher County.

Following in the footsteps of his father, who helped build many of the beautiful cut-stone homes and churches in Whitesburg, Frank Jr. worked as a stonemason after serving with the Merchant Marines and in the Navy during World War II. He was a volunteer fireman and worked with the Letcher County Sheriff’s Department as a fingerprint expert.

Funeral services were held July 2 at Letcher Funeral Home. Burial was in the Nelson Fields Cemetery at Little Cowan.