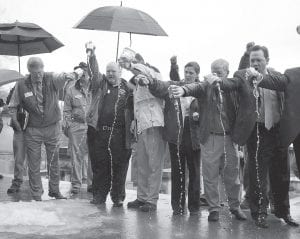 In a move history won’t record as being as important as the Boston Tea Party, representatives of Kentucky bourbon distillers poured samples of their product outside the Capitol entrance in Frankfort Tuesday as part of a rally held to protest a proposed alcohol tax increase by the state legislature. Lawmakers on the House Appropriations and Revenue Committee are staring down a projected $456 million revenue shortfall for the next fiscal year. They approved the tax measure, which includes doubling the state’s cigarette tax from 30 to 60 cents a pack. Related story begins on Page 1.