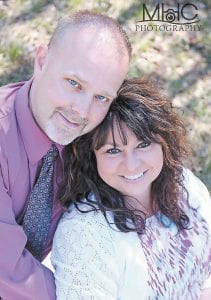 A Letcher County school district employee remains in a Tennessee hospital after sustaining serious injuries in a freak accident while on vacation.

A tree fell on Michelle Tilley, 41, of Pike County, on July 10 while she was in a cemetery at Cades Cove, a valley in the Great Smoky Mountains National Park.

The group had stopped near an old church to look at a deer. Jonathon Richardson took a close-up photograph of the deer and everyone except Billy Tilley was standing in a cemetery located adjacent to the church looking at the photo on the screen of a digital camera.

“We were all looking at the picture and laughing and all of a sudden it happened,” said Lesley Richardson. “We heard the tree. It was a very loud crack and my husband said ‘run.’”

Ropes blocked off an L-shaped sidewalk in the cemetery, preventing Michelle Tilley from being able to run away from the falling tree, Lesley Richardson said. The Richardsons were able to run left, but from where Mrs. Tilley was standing she could only run toward the direction the tree was falling,

“She ran as fast as she could,” said Richardson. “It happened so fast.”

Mrs. Tilley was holding her one-year-old daughter and used her body to shield her daughter from the tree. The one-year-old and the Richardsons’ seven-yearold son each suffered a scratched head and were taken to a hospital.

“We weren’t sure if the tree hit them,” said Richardson.

The Tilleys’ nine-yearold daughter and the Richardsons’ 11-year-old son rolled out of the way of the falling tree.

Richardson said there was no cell phone service in that area and her husband drove and found a park ranger. It took about 40 minutes to an hour before an ambulance arrived on scene, Richardson said.

Billy Tilley and Jonathon Richardson are both paramedics with Neon Volunteer Fire Department. Mrs. Tilley is an aide in the structured classroom for autistic students at West Whitesburg Elementary School. The Tilleys live near the Letcher-Pike county line. The Richardsons live in Thornton.

Mrs. Tilley has undergone surgery. Richardson wouldn’t go into detail about Tilley’s injuries but did say it was a back injury.

“She wants everyone to keep her in their prayers because she knows that is going to get her through this,” said Richardson. “She’s just a really good person.”

At least three fund-raisers have been organized to raise money for the Tilleys. M.H.C. Photography is selling raffle tickets for a photo package. Tickets can be purchased at M.H.C. Photography or Fraziers Farmers Supply parts department.

The Whitesburg Appalachian Regional Hospital gift shop is selling raffle tickets on $50 worth of merchandise in the gift shop.

A soup bean dinner is also being planned.