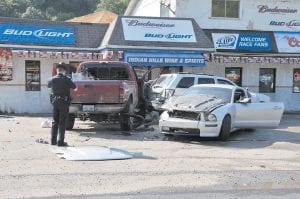 FATAL WRECK — An officer photographed the aftermath of a wreck that killed Mayking resident Kelly Caudill while Caudill was standing beside the truck at left. (Photo by Chris Anderson/Appalachian News-Express)

Funeral services were held over the weekend for a 52-year-old Mayking man killed in a freak automobile accident in Pike County earlier last week.

Kelly Ray Caudill died August 1 after he was struck by a parked Jeep Cherokee near Pikeville while taking a smoke break outside a pickup truck in which he had been riding.

According to the Pikeville City Police Department, the mishap occurred about 5 p.m. last Thursday at Indian Hills Liquors, located adjacent to the Food City store at Shelbiana, a community located just south of Pikeville.

Pikeville Detective Bruce Collins said 19-year-old Jacob Ward of Pikeville pulled his Ford Mustang out of the Food City parking lot onto U.S. 460 eastbound and traveled off the roadway and into the Indian Hills parking lot. Ward’s vehicle hit the parked Cherokee, knocking the sport utility vehicle into Caudill and the passenger side of a parked Ford F-250 pickup truck in which Caudill had been riding.

Caudill’s widow, Dianna Gilliam Caudill, said her husband had been in Pike County with a cousin who had been looking at a stand of timber to buy for logging purposes. She said her husband had gone into the package store to buy a Mountain Dew, then walked back outside for a smoke while his cousin, Greg Amburgey of Knott County, completed his purchase in the store. 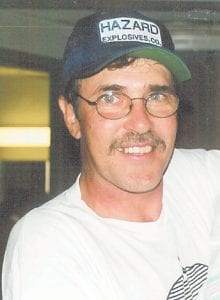 Caudill was transported to Pikeville Medical Center, but was pronounced dead a short time later. Ward was also taken to the hospital for treatment of injuries, but was released.

U.S. 460, at the interchange of the roadway with U.S. 23, was closed for several hours after the crash while police reconstructed the accident. Tire tracks, presumed to be those left by Ward’s Mustang, remained on the roadway and were measured by police.

Kelly Caudill was the son of Thelma Jacobs Caudill of Premium and the late Darrel Caudill. He was the father of the late Kelli Caudill.

Funeral services were held August 4 at Letcher Funeral Home. Burial was in the Caudill family cemetery at Premium.

Information for this report was also gathered by Mountain Eagle contributor Chris Anderson, a reporter/photographer for the Appalachian News-Express in Pikeville.